The Best Of UFC 241 Media Day: Hear It Straight From The Fighters’ Mouths 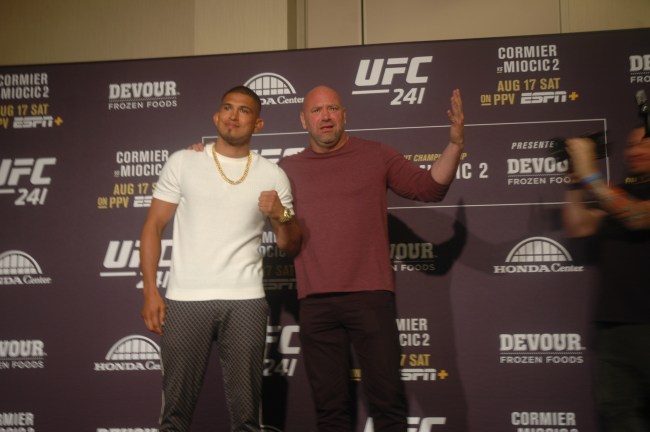 Presented in partnership with UFC 241 on ESPN+

ANAHEIM, Calif. — Need any more reasons to sign up for ESPN+ and order the UFC 241 pay per view main card? Well, if the return of Nate Diaz and a heavyweight title fight aren’t enough, take a look below to find out what the fighters are thinking heading into the biggest fight card of the year.

From Paulo “The Eraser” Costa’s ongoing feud with rival Yoel Romero, to the emergence of some great new UFC talent like Ian Heinisch and Cory Sandhagen, the UFC 241 card is full of great fighters and exciting action.

Oh, and don’t forget, this may be the last time we see UFC heavyweight champion Daniel “DC” Cormier in action, so add that to your list of reasons to tune into one badass main card on ESPN+, because as Cormier himself mentioned, Miocic “seems pissed off but whatever. He’s always pissed off … what was he gonna do on Saturday? Punch me in the face, so on Saturday he’s gonna punch me in the face. Mad or not mad, so it doesn’t really matter what he’s feeling. We’re gonna fight.”

“When I was younger, I had to deal with so many things. When I left the Olympics, there wasn’t much left of Daniel Cormier — captain of the Olympic team and you don’t get to step on the mat? It broke me down and it should have. So, when I got this second opportunity to start fighting, I understood who I was because I was broken. I was a broken man when I started fighting and I was like ‘man, if these things work out for me, I want to appreciate it because I took the Olympics for granted. I took being the number one guy in the US for granted.

“I’ve been Evander Holyfield for a long time and I’m proud of it. Now I’m just the heavyweight champ of the world. Just like Evander.

“It’s insane to think about the career and the journey. It’s been madness. To have started back in 2010, taking fights on eight days notice flying to Australia for $7,000 to go fight. I never could have imagined I’d be here today.” 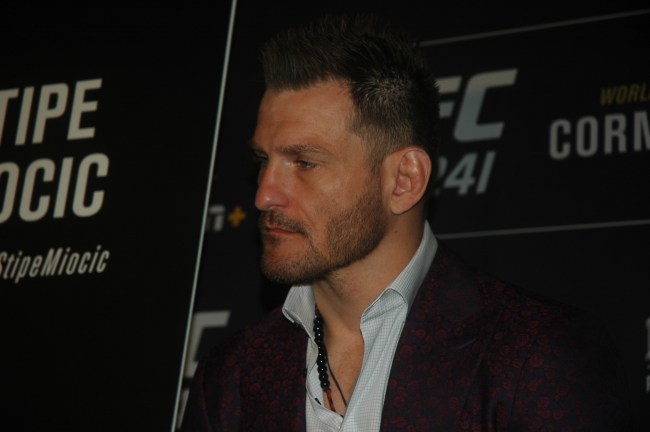 “I don’t really care if I get a bad rep. I could give two Fs what people think about me.

“I’m gonna worry about Daniel. That’s all I care about … I want to fight DC. My feelings were hurt.

“When I lost to JDS, I knew I could fight him the next day and beat him. With DC I felt like I was beating him and then I took a punch. It happens. It’s the sport we’re in. We we’re big boys. We wear 4 ounce gloves. Something’s gotta give but when I walked in I knew I was fine. I knew I could hang with him.” 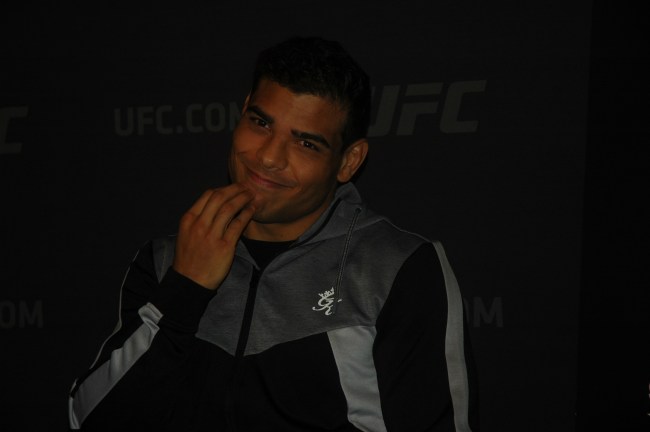 “I want fight against him because he talk a lot of shit about me. It’s personal. And because I’m ready for everyone on this division. I’m ready. I will show who is the new king of this division. It’s me. I can beat everybody. 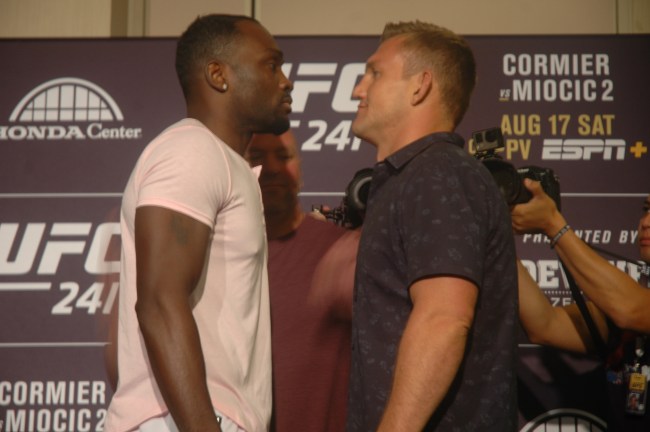 “I’m on the biggest pay per view card of the year fighting a very game opponent , so this opportunity is huge. I’m just gonna seize the moment. The most eyes are gonna be on me that they ever have been on me and I’m just gonna put on a show for the fans.

“I’m supposed to be dead in prison. This is all a bonus to me. When I used to fight there was no ref to pull you off and it’s possible that you’re gonna die. Out here, I get to do what I love, get paid for it, and there’s a ref that can pull someone off if it goes too far.” 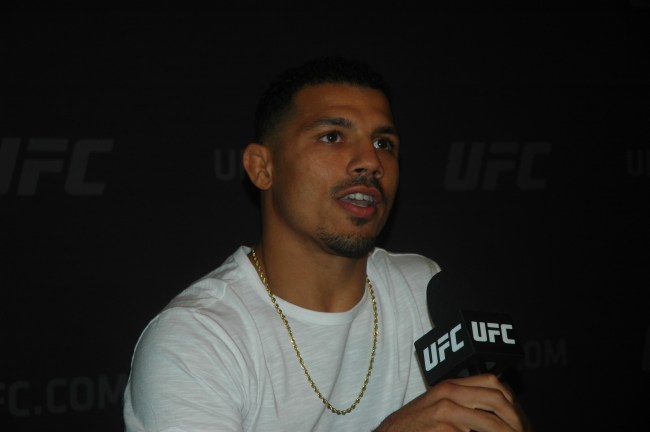 “I feel like the bigger the show the better I fight, so hopefully I give you guys the best show you’re gonna get on Saturday.

“In high school in wrestling I was a villain. I don’t know why … come Saturday I’m gonna embrace the boos. I know I’m gonna get boos walking in and I’m gonna use that as motivation … I’m not a bad guy. But when I’m in there a different switch comes on. I have to be mean.

“I feel kind of disrespected that I’m fighting a guy that’s 3-3 in the UFC. I’m 4-1, but it’s a fight. Anyone can win. I just gotta make sure I get this victory so I can go out there and fight someone in this top 15.

“I’m glad I can get the opportunity to fight on a big card and I hope that my boy ‘DC’ pulls it off. For the co-main event I actually think Pettis is gonna win that fight. It’s easy to beat Diaz. You just kick him. He doesn’t check kicks. Break him down, and then you can open up your hands.” 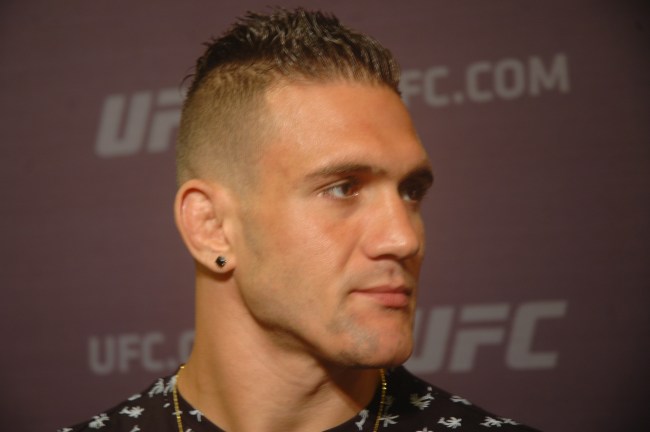 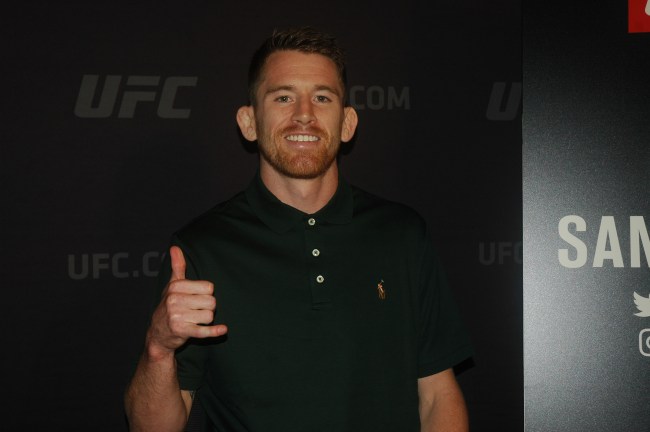 “It’s just gonna be maximizing my advantages. The margin of him being like the better striker, him being the better jiu jitsu guy or wrestling or wherever he thinks he’s the margins are gonna be much bigger and he’s gonna take the fight to, those are gonna be very very small. At this point, fighting the top-10, the margins aren’t gonna be too big so it’s all about who can perform and who can maximize their advantages. In the 135 pound division at bantamweight I have a lot of advantages. I’m very tall, I’m very fast, and I have very good footwork. For someone to try to figure me out in 15 minutes is gonna be really tough, and I think Assuncao’s gonna learn that. But that being said … the dude has a win over Street Jesus [Jorge Masvidal] too so it’s gonna be tough and I’m ready for whatever he brings.

“I took six or seven months off after that. I spent a lot of time in the mountains. I spent a lot of time with myself and I spent a lot of time on meditations and things like that kind of just figuring out what was my purpose behind fighting because that loss really crushed me. I built up in my head that I was this real big character of fighting. I really identified with that. I kind of got rid of those identifications and I kind of found the reason that I’m fighting and why I’m here, and after that, performing felt like a lot less pressure and it felt a lot more like it was me expressing myself.

“In the entirety [of the division] I see it as a three-way race between me, Sterling, and Yan hopefully for an interim belt before Cejudo comes back … I just don’t see him fighting at ‘35 for another year if he goes down to ‘25 after this one, so I think they need to do an interim belt to push some of the newer faces in the UFC so we have an opportunity to build our name too.

“Being able to be still in a fight and battle the little voice in your head that tell you you’re tired or tell you ‘’man I just got hit really good’ … practicing meditation outside of fighting allows you inside of fighting to turn those voices off very quick because if you spend 30-45 seconds on a voice that says ‘I just got clipped really big’ it’s gonna change your fight style. Being able to turn that voice off immediately and get back to my flow state in the freedom place I like to fight has been extremely important to me.

“If I was fighting on the [UFC 241 pay per view] main card [on ESPN+] I probably wouldn’t be able to watch the main card, so I’m really looking forward to Yoel fighting, Diaz and Pettis, Stipe and DC. I think I’ll have time to shower and do my media stuff afterwards and then be able to watch those fights too. Fighting on a big card like this is gonna be interesting. I think that the arena’s gonna be crazy that night.”