UFC 242 Fight Week: These Finishes Will Get You Stoked for UFC 242 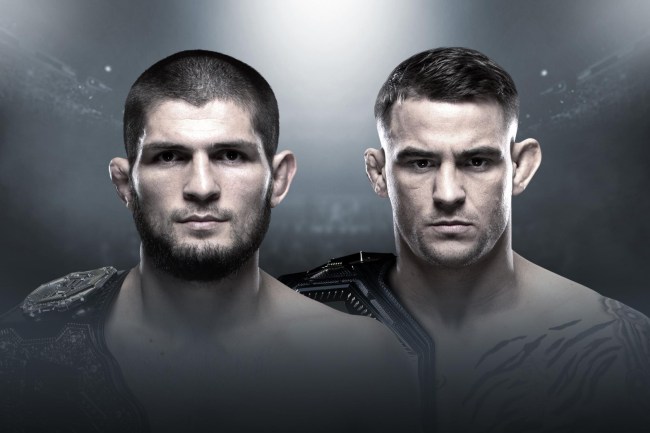 In what’s becoming a staple of our UFC fight week coverage, it’s time to take a look at some wild and spectacular finishes. From some wicked punches and kicks, to spinning back fists, knees, and chokes, the finishes are the coup de grace of mixed martial arts, and the very thing we’re all anticipating on Saturday, September 7, when lightweight champion Khabib “The Eagle” Nurmagomedov faces interim titleholder Dustin “The Diamond” Poirier in the UFC 242 Pay Per View main event.

The card is stacked with finishers, guys like Edson Barboza, Paul Felder, Curtis Blaydes, and Mairbek Taisumov, but the lightweight title unification bout between Khabib and Poirier is about as high level an MMA fight as you’re ever going to have a chance to see, so don’t forget to put aside a few hours on Saturday afternoon (2 p.m. EST, 11 a.m. on the West Coast) to catch the UFC 242 Pay Per View main card on ESPN+.

This is probably the most famous finish in MMA history, or at least it was seen by more people than any other mixed martial arts fight in history.

Last October’s record-breaking UFC 229 main event between Khabib Nurmagomedov and Conor McGregor ended in a nasty fourth-round neck crank. With Nurmagomedov knocking McGregor down earlier in the fight and Conor storming back to take the third round, Khabib sealed the deal in the fourth frame, taking the Irishman to the ground before slapping on the back mount.

From there it was all wrestling and ground and pound, with Khabib softening up McGregor before snatching the neck and cranking it real good.

Check out Khabib’s highlight reel below:

Poirier’s Got Some Hands on Him

On his way to this highly anticipated UFC 242 main event versus Khabib Nurmagomedov, Dustin Poirier has put together one of the more impressive runs in UFC lightweight history.

Most recently winning the UFC interim lightweight title with a unanimous decision over featherweight champion Max Holloway, Poirier previously finished three straight MMA world champions: Eddie Alvarez, Justin Gaethje, and Anthony Pettis. He also has five other knockouts inside the Octagon to go along with a trio of submissions.

Here’s a bit of Dustin’s handywork:

Barboza’s So Smooth You’ve Got to Watch Twice

Seventh-ranked UFC lightweight Edson Barboza has never been much of a talker, but man can this guy throw some devastating kicks … and knees.

Facing Paul Felder in the UFC 242 co-main event, that’s the penultimate fight on the Pay Per View main card on ESPN+, Barboza has delivered some of the most spectacular finishes in UFC history, in particular, this wicked spinning hook kick to knock Terry Etim stiff at UFC 142:

Oh, but the Barboza highlights don’t end there. Oh no, they don’t.

It was a little over two years ago that Barboza made many “Knockout of the Year” lists with this picture-perfect flying knee, knocking Beniel Dariush out.

If you’re timid this might harsh your mellow, but this flying knee is bound to get your blood pressure going:

Previously losing to Barboza when the two first met back in 2015, Felder wants revenge in the UFC 242 co-main event, and if he has it his way, it will come in stunning fashion.

Looking back through Felder’s highlight reel, his sophomore effort in the UFC still stands out as an all-time highlight. I mean, it’s not often that you see such a perfect spinning backfist:

There has only been a trio of spinning back fist finishes in UFC history, so this is a rather impressive feat; however, Felder’s highlights don’t end there. He also throws some nasty elbows, and this finish over Stevie Ray back in 2017 earned Felder a Performance of the Night bonus.

Feast your eyes on that!

So there are a few finishes to wet your palate before the big UFC 242 Pay Per View main card on ESPN+.

Don’t forget, it starts early, which makes it the perfect fight card to watch in your bathrobe with breakfast!