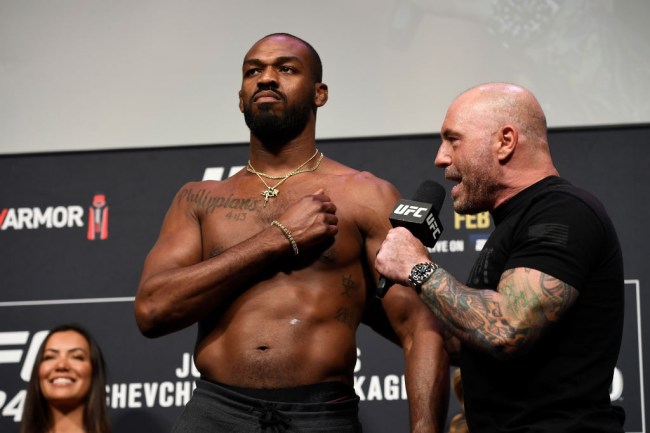 Kind of a top heavy card, to be honest, but UFC 247 has some pretty interesting fights, especially in the main and co-main events, where two of the UFC’s most dominant champions, Jon Jones and Valentina Shevchenko, will attempt to defend their titles against a pair of hungry challengers.

It may not be the deepest card, but the Pay Per View portion has some good fights, and the prelims got a last second boost, when UFC veteran James Krause offered to step in on 24 hours notice to take a fight at middleweight. Talk about some total bad-assery.

Anyway, here’s a quick dive into the UFC 247 card. Read on for all the major storylines.

Jon Jones is the greatest MMA fighter in the history of MMA fighters. This is not hyperbole. This is just an opinion that many could argue is absolutely factual.

A UFC champion, on and off, since 2011, Jones basically owns every single record at light heavyweight. He’s a dynamic fighter with style and swag. He has an incredible kicking game, world-class wrestling, and a submission game to complement a vast skill set.

Jones is basically one of the greatest performers combat sports have ever seen, and at UFC 247, he’ll attempt to win his fourteenth UFC title fight, breaking a record he currently shares with Georges St-Pierre.

Despite being a -450 favorite, Jones still has his work cut out for him with challenger Dominick Reyes, who packs some mean power into his left hand and shin. Reyes, who is undefeated as an MMA pro may just have the right skills to beat Jones. He’s tall, long, and fast, and really has nothing to lose. It’s a great recipe for chaos in the Octagon.

So will it be Jones? Or will Reyes become the first man to actually beat Jon Jones in an MMA fight?

It’s Not Really a Matter of If, But Rather How Valentina Shevchenko Wins at UFC 247

A taekwondo master with ample Muay Thai, wrestling, and jiu jitsu skills, Shevchenko has quickly distinguished herself as a force at 125 pounds. In fact, the gap between Shevchenko and her flyweight peers is so great that she’s currently listed as a -1200 favorite at many sportsbooks. This does not bode well for her UFC 247 opponent, Katlyn Chookagian.

Chookagian is a perfectly credible fighter. She trains with a great team in New York, and has gone 6-2 inside the Octagon, but she’s really no match for Shevchenko, who is a complete fighter with devastating moves and a creative arsenal.

In mixed martial arts, it’s impossible to really do the math to figure out who will win, but just realize that a little over a year ago, Chookagian dropped a decision to Jessica Eye. The same Jessica Eye who got blasted by a picturesque Shevchenko head kick last June at UFC 238.

However, the main intrigue here comes from just how Valentina Shevchenko will beat Katlyn Chookagian. Will it be another highlight reel finish? Chances are.

We’re gonna skip over the featured bout between heavyweights Juan Adams and Justin Tafa and jump straight to the featherweight contest between Mirsad Bektic and Dan Ige.

It may not necessarily be the greatest fight for a Pay Per View, but Bektic, once a highly touted prospect, needs to win this bout to get his career back on track. Dan Ige, who has won four straight, presents a lot of problems for Bektic. This bout has the potential to be a technical chess match. There’s also the chance that Bektic plays it safe and just keeps it on the ground.

For the sake of UFC 247, and everyone’s enjoyment, I hope Ige’s takedown defense can hold up against Bektic, who is training under Firas Zahabi, one of mixed martial arts’ great tacticians. If Ige can keep it standing, this could turn out to be a fun and frenetic fight.

Derrick Lewis is one of MMA’s great treasures.

A legitimate beast inside the Octagon, Lewis is one hell of a fighter with tons of knockout power. He also happens to be absolutely hilarious. I mean, come on, he basically earned a UFC title shot by declaring that his balls were hot. Well, he also flatlined Alexander Volkov moments before his viral tagline.

Anyway, back to the fight.

Lewis is fighting in his adopted hometown of Houston, Texas for the first time since 2015, and while this info doesn’t necessarily translate to the viewing audience at home, it’s a way of saying that Derrick Lewis will have the entire arena behind him when he fights Ilir Latifi at UFC 247.

With Latifi making his heavyweight debut, this really is Lewis’ fight to win. He’s bigger. He hits harder. And he’s been in the Octagon with most of the top heavyweights in the game.

Additionally, Lewis really wants to deliver the knockout for the hometown fans, so expect Lewis to come out headhunting from the opening bell.

The Best of the Rest

As previously mentioned, UFC vet James Krause pulled it out and laid it one the table on weigh in day, accepting a fight on 24 hours notice. Krause is a gamer who’s riding a six fight win streak. He wasn’t even in Houston to fight, but rather to corner a fighter on the card, and after Antonio Arroyo was pulled from the card for medical reasons, Krause stepped up. This will be his first fight at middleweight.

Also on the prelims is an intriguing flyweight fight between Andrea Lee and Lauren Murphy. Despite losing her last bout, Lee has a lot of heat behind her, and given the state of the flyweight division, it’s not impossible to think that she’s not far away from a title shot of her own. This bout will be crucial.