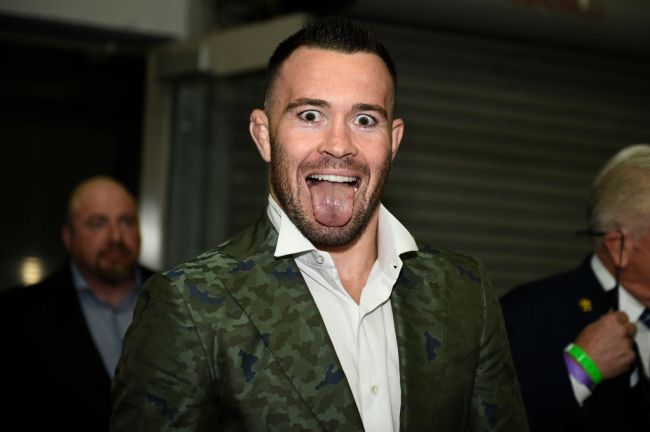 Colby Covington has stirred the pot ahead of UFC 264. Four days ahead of the highly-anticipated conclusion to the Dustin Poirier vs. Conor McGregor trilogy, ‘Chaos Colby’ posted an old clip of Poirier during a sparring session.

Covington stated in a previous interview that Poirier, his former teammate, is not a good guy and teased the video proof. He released the snippet on Twitter.

The guy wearing full nerf gear head to toe to protect his face and his feelings is Poirier. The guy with no headgear, wrestling credentials or brain cells left is “khabib.” @DustinPoirier Good guy? Bad guy? You be the judge👨‍⚖️ #AndNew #UFC264 pic.twitter.com/EMMFwC2b4E

The video shows Poirier in full protective gear as he punches and drops his sparring partner. The unnamed fighter drops to the canvas and Poirier bellows, “AND NEW!”

Covington claimed that the video was filmed during Poirier’s training camp for his title bout with Khabib Nurmagomedov. He also hinted that the sparring partner was an amateur.

MMA Junkie’s Mike Bohn has reported otherwise and added that it was nothing out of the ordinary.

Glad people can now see for themselves the way Colby Covington described the Dustin Poirier sparring video in our interview was misleading. Nothing out of the norm.

Also worth noting that was not an amateur fighter he was sparring with, nor was it in the Khabib camp. Carry on.

Bohn was not the only person to come to Poirier’s defense. In fact, he was one of many.

While the video provides some insight into the UFC beyond the public eye, many veteran fighters both past and present explained that the video is not unusual.

Poirier and Covington have a long-storied hatred for one another. Once training partners with American Top Team, Covington quickly targeted Poirier after he adopted his brash, loud-mouthed trash talk.

Poirier has unequivocally expressed his dislike for Covington ever since. Many of Poirier’s American Top Team members share that sentiment.

Jorge Masvidal was one of the first to speak out online after Covington posted the video.

Why don’t you post the video of @DustinPoirier dropping you with a body shot? Always hating on people with power #supernecessary

ATT affiliate Cody Durden also got in on the conversation.

“He dropped him, and walked away,” he said. “Nothing dirty about it. Looks like a motivated Dustin!”

Former UFC fighter Isaac Vallie Flagg was amongst those to comment.

Anybody who thinks Dustin did anything wrong in the sparring video has never spent time in a gym before ha.

Also, if Colby put this out with malice he’s more of a dick than Dustin ever could be for being being in the middle of a round and clipping a guy. Your either snitching on Dustin or trying to make the other guy look like shit. Both are bad looks.

Retired UFC fighter and commentator Kenny Florian had a rather facetious take.

Yes, people get submitted, dropped, hurt, injured and KO’ed in sparring sometimes. I shouldn’t be shocked that some people are shocked but here we are in 2021. 🤦🏻‍♂️😂

First and foremost, what a professional backing off, secondly, headgear is a CHOICE. show me a video where Poirier is telling/forcing his sparring partner to NOT wear head gear, then he’d be a douche. https://t.co/g8O7X5oGcn

If Poirier asked his partner NOT to wear headgear, the narrative absolutely changes. But as of right now, there is no evidence of such a request.

As a result of all the pushback, this is a tough look for Covington.

Poirier, who is likely more focused on beating McGregor, has not commented. He returns to the Octagon on Saturday for the most-anticipated fight of 2021.