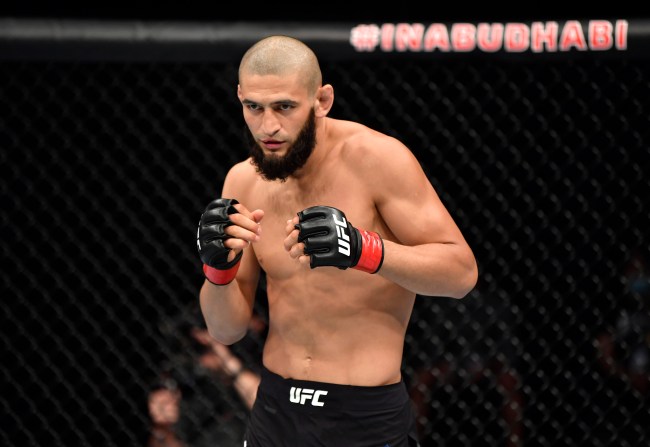 On Monday, Chimaev appeared to abruptly retire from MMA after his battle with Covid is apparently affecting his health to the point where he can’t train properly.

Khamzat Chimaev posted this on IG moments ago. https://t.co/XzF02NHe06 pic.twitter.com/XgMgIXtCEC

I want to say thank you to everyone for their support in my path in this sport,” “I think I’m done. Yes, I know that I didn’t take the belt, but this is not the most important victory in this life. It may upset you, but my heart and body tell me everything.

The Russian-born fighter went on to post a worrying pic that implied he was coughing up blood.

Chimaev also posted the following in his Instagram Story about 25 minutes ago.

The 26-year-old Chimaev has reportedly been hospitalized multiple times after being stricken with multiple health issues due to his battle with Covid.

Update: Dana White spoke to MMA Junkie and says Chimaev isn’t returning but was just emotional while taking meds for his lingering case of Covid-19.

Just spoke with UFC president Dana White after he talked with Khamzat Chimaev. According to White, Chimaev is not retiring and is still on track to return in June. Full story on MMA Junkie shortly.

“When he got here, the doctors took care of him, and they put him on prednisone, which is a nasty f*cking steroid,” White told MMA Junkie.” So he’s on prednisone, and he’s supposed to be taking this thing and chilling, relaxing, and letting himself recover. He went in and f*cking trained today, felt like sh*t, and got super emotional and posted that.

“He’s not supposed to be training, but you know, this guy’s a savage. He wants to fight like every f*cking weekend, and now he can’t even train, so he just got emotional and posted that, but he ain’t quitting.”