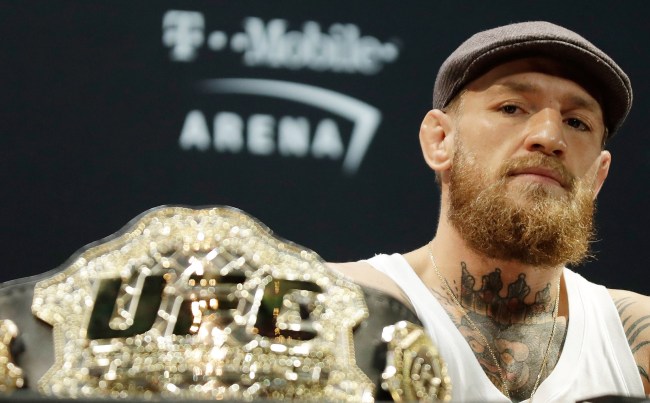 Monday night, Conor McGregor shocked the sports world by announcing that he is retiring from MMA and the UFC.

“Hey guys quick announcement, I’ve decided to retire from the sport formally known as ‘Mixed Martial Art’ today,” McGregor wrote in a tweet. “I wish all my old colleagues well going forward in competition. I now join my former partners on this venture, already in retirement. Proper Pina Coladas on me fellas!”

Naturally, no one really believed him. Especially since he talked about fighting in July on The Tonight Show With Jimmy Fallon just prior to his retirement announcement.

Then UFC President and Conor McGregor-enabler Dana White issued his own statement basically confirming that McGregor is indeed retiring from MMA.

“He has the money to retire, and his whiskey is KILLIN’ it,” wrote White. “It totally makes sense. If I was him, I would retire too. He’s retiring from fighting, not from working. The whiskey will keep him busy, and I’m sure he has other things he’s working on. He has been so fun to watch. He has accomplished incredible things in this sport. I am so happy for him, and I look forward to seeing him be as successful outside of the Octagon as he was in it.”

Now, with the spectre of McGregor really being done with MMA, current and former UFC fighters, including Khabib Nurmagomedov and Ronda Rousey, have weighed on The Notorious One’s odd, out-of-the-blue decision.

There can be only one king in the jungle.
Only ☝️ pic.twitter.com/BuqVNUkoR0

Following his "creative" and "cryptic" retirement, @RondaRousey tells @TheNotoriousMMA the next round's on her (via @SportsCenter) pic.twitter.com/2i8akIKlWz

Second round is on me😉 https://t.co/1liGxXhVTG

I’ve come out of retirement.

Hmmm.. to young bro @TheNotoriousMMA the whisky high don’t compare to getting that arm raised. Not much does! U going to miss it! Buckle down and train youngster https://t.co/PQQcZzQrsw

So we will be getting an @TheNotoriousMMA Fight announcement within the week 😂 https://t.co/bndmhKF2Fg

I don’t believe it. I think it’s tactics #retirement

Hey guys just a quick announcement! I’ve decided to retire from eating @KFCAustralia today and switching to a better and healthier option…trying to decide which 🤔 thoughts? #BetterLiving 😀😂

And just like that he was gone. Congrats @TheNotoriousMMA on a career that changed the game. The sport has grown and you have helped the sport crossover. Thank you Conor, no doubt @ProperWhiskey will have the same success as you in the octagon. Cheers

Get in make money get out.
Much respect to Conor.
He’ll be back though for sure! https://t.co/V1mMpPHini

Does anyone out there have any doubt that he’ll be back? How many times has his BFF Floyd Mayweather “retired” only to come back when the payday was too nice to ignore?

My guess is that this is just one more way to drum up attention and raise the purse when does “return.”

In the meantime, WWE Superstar Finn Balor predicts McGregor to and up in the same place many expect to see Rob Gronkowski come April.

See you at ‘mania brother