The UFC Has A Disaster On Its Hands After Khamzat Chimaev Misses Weight By 7.5 Pounds 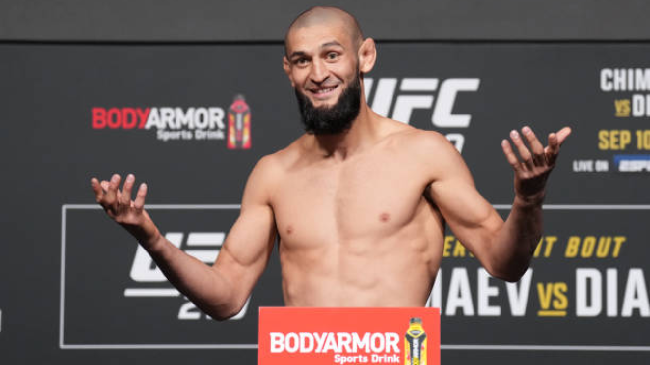 This week has been absolutely brutal for the UFC.

Yesterday, the organization had to cancel their pre-fight press conference because of a backstage altercation between Kevin Holland, Khamzat Chimaev, and Nate Diaz. Today, things got even worse.

There had been reports this morning about concerns over Chimaev’s weight and there was the possibility he was as much as 10 pounds over the welterweight limit. Chimaev is supposed to take on Nate Diaz in the UFC 279 main event tomorrow night.

Chimaev has now weighed in and he officially came in at 178.5 pounds, missing the limit by 7.5 pounds.

This is an absolute mess for the UFC. There is no way around the fact that the UFC 279 card was weak to begin with. The card has no title fight. The main event features a fighter who is 1-3 in his last 3 and whose last win came against Anthony Pettis in 2019.

Still, the UFC was expecting fight fans to spend $75.

Now, they’ll have an even tougher time selling this card to fans as they will likely have to make some major changes to the card.

The option that makes the most sense is to have Khamzat fight Kevin Holland, who was scheduled for a 180-pound catchweight fight, especially after the events of yesterday. Diaz could fight Tony Ferguson with both having weighed in for welterweight fights. Then Li Jingliang and Daniel Rodriguez could fight each other if the commission allowed.

While this would allow the UFC to keep some of the bigger names on the card, it would then mean that the main event would feature a fighter who is 1-3 in his last 4 and a fighter who has lost his last 4.

With 2 other fighters having already missed weight, UFC 279 looks like it is going to be an absolute mess for the UFC.