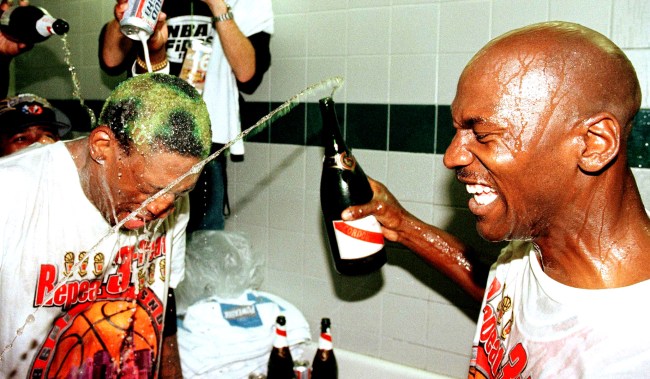 There was so much fascinating footage and information on display during ESPN’s Emmy awarding-winning 10-part documentary series The Last Dance about Michael Jordan and the six-time champion Chicago Bulls of the 1990s, it’s hard to believe there could actually be something they missed.

We’ve seen a few extended scenes, like the one expounding on the volatile relationship between Jordan and then Bulls general manager Jerry Krause.

But now, thanks to pre-orders for The Last Dance Blu-ray Gift Set now being opened up, there is even more never-before-seen footage trickling out.

In the first of the The Last Dance bonus footage to be released, we get to see some of Jordan being interviewed by the late Stuart Scott in a June 1998 ESPN “Sunday Conversation.”

In the clip, Jordan talks about his motivation to win his sixth title with the Bulls during the 1997-98 season.

Jordan explains that, even with enough rings to cover one entire hand, as Scott put it, he still somehow believed he had doubters.

“Does that drive you?” Scott asks. “Everybody continues to say it’s going to be Utah this year for the first time… the Bulls don’t have this, they don’t have that.”

“That’s motivation” Jordan replied. “If it’s not then, I mean, you know, you certainly need to look in the mirror, but that’s that’s a sense of motivation. You got to have some inner motivation too. You want to be you want to be successful. You want to, it’s a whole, it’s a long season that you started off trying to end the season with with a win, you know? That should never deteriorate.”

Annnd that right there is why he’s the GOAT. No debate.

We found some unreleased footage from The Last Dance 😳 pic.twitter.com/lbN6H4fSlr

“You set your own goals, but they are led by what people think you can accomplish”

That may be his best quote...

R.I.P. Mamba and Stu. You are missed.