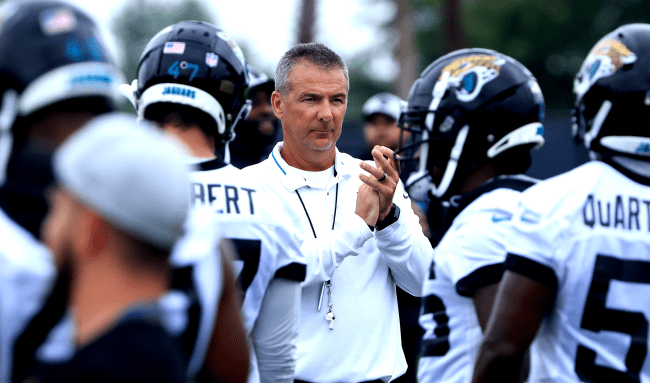 A bombshell new report in which one former member of Urban Meyer’s Jacksonville Jaguars staff said it was “the most toxic environment I’ve ever been a part of” is causing quite a stir.

Meyer reportedly made life miserable for many of his coaches and players, constantly threatening to fire them or cut them before he himself was fired after just 13 games.

“The players got it bad when it came to him talking to us,” one veteran player told The Athletic, “but I believe the coaches got it worse.”

Jaguars wide receiver said about Meyer, “I feel like he put us in very bad positions and, when the questions came, he deferred the responsibility, which made it look like we were just out there being the worst team in the league. But we weren’t put in position (to succeed).”

Chark added, “He told us from day one that he was going to maximize our value. And I truly can’t tell you one player that maximized their value on the Jags this year.”

Incredibly, while Urban Meyer was reportedly carrying on about what a winner he was and what losers his coaches were, the former college football coach didn’t even know who several of the star players in the NFL were.

Meyer said he conducted a six-month deep dive on the NFL that included interviews with his former Florida and Ohio State players as well as a study of the salary cap. But multiple sources said Meyer was unfamiliar with star players around the league, including 49ers receiver Deebo Samuel, Seahawks safety Jamal Adams and Rams defensive tackle Aaron Donald, a three-time NFL defensive player of the year.

“Who’s this 99 guy on the Rams?” Meyer asked one staffer during the season, according to a source. “I’m hearing he might be a problem for us.”

Related: Urban Meyer Apparently Has No Idea What Is Going On With His Players After Botched Interview Answer

Donald was one of the best players in college football while Urban was at OSU and Deebo was a stud SEC receiver. I just don’t believe this.

This might be the first case of couch-coaches ACTUALLY being more qualified than an actual NFL coach.

When ownership doesn’t know what it’s doing, this happens

I remember when I used to consider this guy a genius. My bad