Urban Meyer’s Reportedly ‘Enamored’ With Trevor Lawrence, So WTF’s Taking The Jaguars So Long To Hire Him? 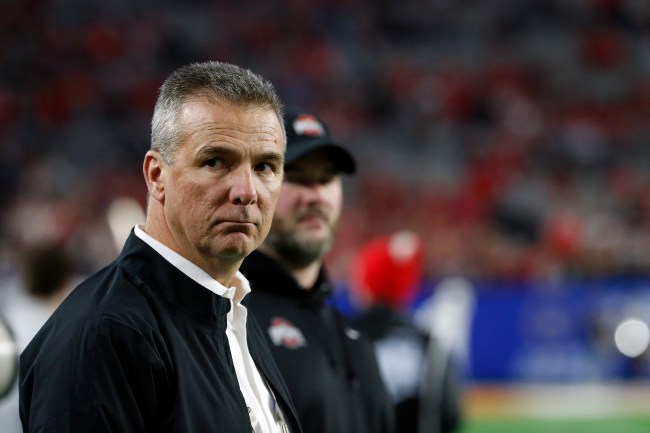 Urban Meyer’s one of the hottest names floating around the NFL right now, with the former Ohio State Buckeyes head coach believed to be linked to a ton of franchises for head coaching gigs. While Meyer has yet to make up his mind on the best destination for himself — or if the NFL’s a beast he wants to try and tackle — rumors have been flying that he could roam the sidelines next NFL season.

For years, Meyer’s name has been associated with head coach openings. Whether it was the Cleveland Browns in years past, or, more recently, the Los Angeles Chargers and the Jacksonville Jaguars, nobody knows for sure if there’s one destination that’s able to lure the guy away from his TV job. But, according to Jeremy Fowler of ESPN, it appears as if the Jaguars have the inside track thanks to the team holding the No. 1 overall pick in the 2021 NFL Draft — which, presumably, will be used to select Clemson quarterback Trevor Lawrence.

All is quiet out of Jacksonville on Urban Meyer front. But multiple people close to Meyer believe he will settle on Jags if he does make NFL jump. Chargers interested but questions persist about whether they'd go all-in. And Meyer has long been enamored with Trevor Lawrence.

OK, so let’s just assume Fowler’s report about Urban Meyer’s love for Lawrence is accurate, that leads to one simple question: What’s taking the Jaguars so long to hire the dude as head coach? If he knows the Clemson signal-caller’s the quarterback he wants to lead the franchise into the future — and he can get his guy first overall in the 2021 NFL Draft — is it the Jags or Meyer who’s balking?

A recent report from NFL Network’s Mike Garafolo suggests it might be Meyer dragging his feet, with the reporter saying on Tuesday that Urban isn’t fully sold on the Jaguars quite yet.

From NFL Now on @nflnetwork: The #Jaguars are waiting on Urban Meyer, who seems like he's still trying to decide what he wants to do. Figure this comes to a head one way or another soon. pic.twitter.com/168QC9kV0h

“From what I gather, he hasn’t been full-steam ahead with regard to taking the Jaguars job or making a strong push to say, ‘Hey, I’m your guy,’” Garafolo said. “He’d be the guy in Jacksonville if he really, strongly said, ‘I’m in, let’s go.’”

“Meyer’s trying to figure out what he really wants to do here and are there other opportunities that maybe he would wait for or be interested in,” Garafolo added. “I think he’s kind of going through his options.”

If you’re a Jaguars fan, this has to raise concerns. Hell, if you’re the Jags’ brass it has to be a red flag. If Meyer really loves Lawrence that much, can get control of the roster as de facto general manager and head coach — or at least be heavily involved in the hiring of the person who does — what’s turning him away from Jacksonville? Is it money? Is it power? Is it just the fact that the organization has always been cheap and hasn’t been able to build sustained success?

Urban Meyer apparently has his pick of the litter when it comes to NFL jobs this offseason. Nobody but him knows which way he’s leaning, but the longer he continues to have indecision, the longer it hurts the Jaguars’ chances of hiring him. Meyer may reportedly be enamored with Trevor Lawrence, but unless Jacksonville appeases his wants in other areas, they may miss out on hiring him.