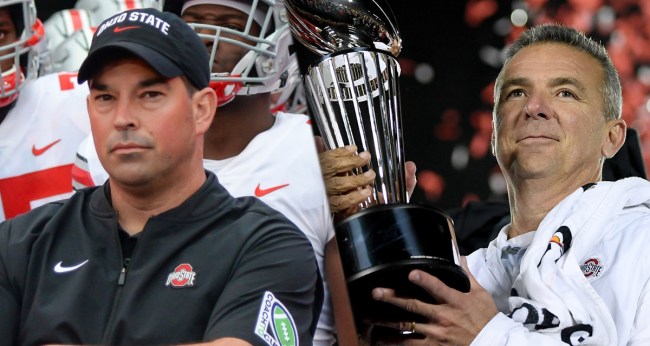 So Urban Meyer taking the head coaching job in Jacksonville is pretty much a done deal, right? Not so fast.

Meyer and the Jaguars may or may not have met this past Friday to discuss the possibility of Urban becoming the team’s seventh head coach, but there are a few other jobs available that might actually be a better fit for the 56-year-old.

Word on the street is that the Los Angeles Chargers, a team that boasts a plethora of young offensive weapons including Justin Jackson, Keenan Allen, Hunter Henry, Mike Williams, and the shoo-in for Rookie of the Year, Justin Herbert, are very interested in the former Ohio State coach.

Last I heard, no formal interview between the #Chargers and Urban Meyer but when I said yesterday the delay with the #Jaguars was partly due to his exploring all options, this is what I was driving at. https://t.co/LZbGSe6JfM

The Chargers are a very attractive team, considering they finished the year on a 4-0 run, but this could just be a smokescreen created by Meyer to gain more leverage in negotiations with the Jaguars.

With Urban, anything is possible

In related news, the Philadelphia Eagles are also looking for a new head coach after firing Doug Pederson earlier this week.

The rumor mill has been saying that current University of Oklahoma Sooners head coach Lincoln Riley is of strong interest to the Birds, but now there’s a dark horse entering the mix, also from the college ranks, in Ohio State’s Ryan Day.

In case don’t remember, and why would you, Day served as quarterbacks coach under Chip Kelly with the Eagles back in 2015. Days also spent two years coaching at Temple.

NFL insider Adam Schefter had previously reported that Day is not interestd in any NFL head coaching openings, but what else would one expect him to say? He signed a contract extension with the Buckeyes last year that runs through 2026.

Nick Saban infamously told LSU fans in 2004 that he wasn’t going anywhere. Then he immediately left the Tigers to go coach the Miami Dolphins. Then, in 2006, while with Miami, Saban came right out and flat told the media, “I’m not going to be the Alabama coach.” How’d that work out for him?

Was Eagles QB coach in 2015 pic.twitter.com/k8nd2YgPgK

Day to the Eagles might still be unlikely, but in the world of football coaching, never, ever, say never.