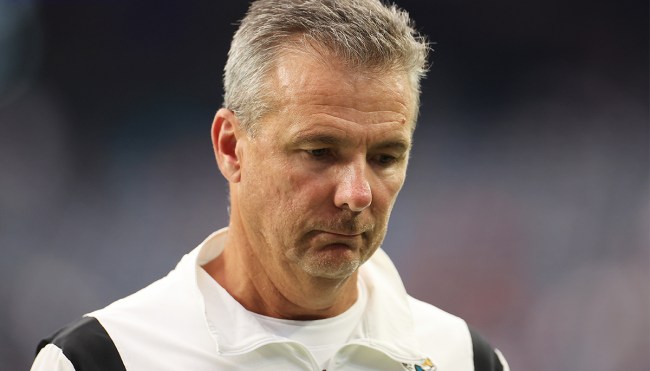 It has not been a great year for Urban Meyer, who came out of retirement when he agreed to become the head coach of the Jaguars last January only to find himself regretting that decision with basically every day that passed once the season kicked off.

Meyer’s ill-fated stint in Jacksonville came to a premature end when he was fired in December after coaching the team to a 2-11 record during his time on the sidelines. The dismissal came shortly after a Jaguars kicker accused the coach of kicking him during practice, but that was far from the only controversy the former Ohio State skipper found himself at the center of while with the franchise.

At the start of October, Meyer was already engaged in an uphill battle with Jaguars fans and the guys in the locker room after Jacksonville dropped to 0-4 following a loss to the Bengals, and it’s safe to say he didn’t do himself any favors by opting to stay in Ohio after the game instead of hopping on the team plane.

The already hot water would soon reach a boiling point after a video of Meyer grinding on a woman at a restaurant in Columbus made the rounds online, which really marked the beginning of the end when you take a look back at the series of events that led to his downfall.

That incident was filmed at Urban Chophouse, the steakhouse bearing Meyer’s name that opened for business last May. However, according to Awful Announcing’s Ben Koo, that will no longer be the case, as the restaurant has been sold to a new owner who plans to rebrand the space and rid it of the coach’s presence.

Regarding Urban’s Meyer’s Chophouse, it’s being sold to Shawn Shahnazi.

Signage and menu will change in a few weeks. GM and Executive Chef out.The longue will become a members only club.

The Ls keep coming and they don’t stop coming.