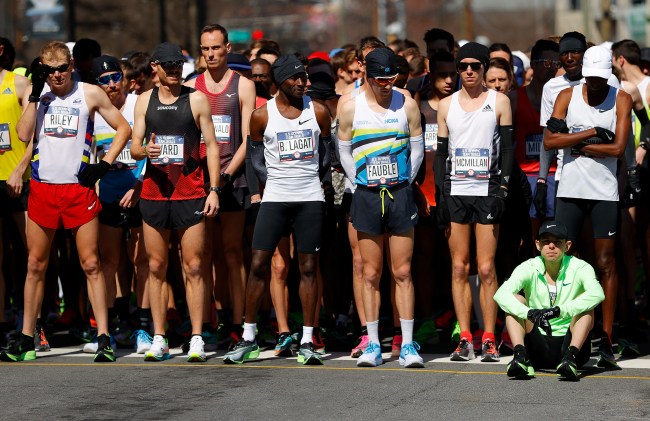 The fate of the 2020 Summer Olympics in Tokyo, Japan has been a hot topic of discussion in the past few weeks as the COVID-19 continues to spread and reach pandemic levels. The latest update I saw was the IOC chairman said they would proceed as if the Summer Olympics were happening and not derail their efforts due to the coronavirus.

As it stands, the 2020 Summer Olympics in Tokyo will kick off in late July which means there are all sorts of Olympic trials taking place right now across the globe. The 2020 US Marathon trials were just held in Atlanta. The top 3 men and the top 3 women each make the US Olympics Team. One of those runners vying for a top spot nearly shit himself and was forced to take one of the fastest dumps I’ve ever heard of at mile 18 before regaining traction in the field and finishing more than 2-minutes faster than his personal best marathon time.

Marty Hehir is a runner with the Reebok Boston Track Club and a full-time student at Sidney Kimmel Medical College at Thomas Jefferson University in Philadelphia. He was previously a Syracuse University cross country runner who helped that team win it all in 2015. He was in Atlanta for the US Olympic trials was at Mile 11 when he first felt the rumble in his belly. By mile 14 he was forced to make serious decisions on whether he can drink water and shit himself or just keep on running.

Jonathan Gault at LetsRun.com has the entertaining story of how Marty avoided shitting his pants and managed to finish 6th overall after evacuating his bowels:

“I can usually put it in the back of my head and forget about it, but it was definitely getting worse,” Hehir said.

Then, like an oasis in the desert, he saw it: a line of porta potties on his side of the road, just past the drinks station at 18 miles. He weighed his options. Pull over, and cost himself guaranteed time. Or try to make it eight more miles without pooping his pants. Pooping his pants was one thing, he definitely wasn’t considering (more on that later).

Hehir knew what he had to do, but he wasn’t happy about it. Slamming his bottle to the ground in frustration, he ran into the porta potty, did his business, and burst through the door to rejoin the race. He popped out right in front of Scott Smith, who later told Hehir that he shot out of the porta potty like “a bat out of hell.”

Hehir estimates his pit stop cost him 15-20 seconds (slightly more than Shalane Flanagan‘s bathroom visit during the 2018 Boston Marathon), but believes it was worth it.

“I was only going to slow down if I tried not to [stop],” Hehir said. “As far as a smart racing decision, that was my best move to get to the finish line faster. Purely strategical.” (via LetsRun)

He was asked if he wiped. This was my first question given that he took a shit in under 20 seconds. His answer was pretty obvious: “Not a chance. Look, my line was: I wasn’t going to be the guy that shit himself in the race. That was not going to be my one-liner after that race. But anything short of that was fair game.”

By the Mile 19 marker he was in 21st place and just 14 seconds behind the main pack of runners. Without his stomach plaguing him anymore he was able to make up the ground and run with a renewed sense of determination.

He went on to finish the race 6th overall with a marathon time of 2:11:29. That was two minutes fast than his previous personal best time of 2:13:49 which came at the 2018 California International Marathon. Unfortunately for him, only the top 3 male runners make the US Olympic Team.

Hehir told LetsRun that stomach issues are very common for marathon runners and 90% of the time it usually means the runner has to take a shit but they typically ignore those signals and just keep on running.

You can check out all of the US Marathon Trials results by clicking here.