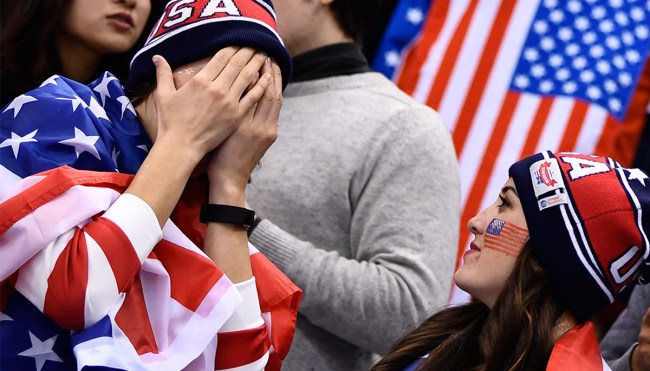 On Tuesday, the New Jersey Devils unveiled the first alternate jersey in franchise history, which also has the proud distinction of being the first hockey jersey with a logo that lets other people know what type of article of clothing you’re wearing.

Those new sweaters didn’t exactly garner a flood of positive reactions following their debut, so I can only imagine the Devils’ social media team is absolutely thrilled with the gift it received when USA Hockey revealed the jerseys the teams representing America will rock at the 2022 Olympics.

“Duds” is the perfect word to describe those uniforms, as it’s hard to think of a more underwhelming route Team USA could’ve gone down—especially when you compare them to the jerseys that will be worn by their rivals in Canada.

The 🍁 is ready for another iconic moment 🤩

Here are the hockey jerseys that #TeamCanada will be wearing as they compete for Olympic 🥇 at Beijing 2022 ➡️ https://t.co/Job1bxn4v2

I’d also be remiss if I didn’t give a shoutout to the simply gorgeous sweaters that Finland will play in, which are pretty damn hard to top.

Based on how fans of Team USA reacted to the new Winter Olympics jerseys, it’s pretty safe to say Nike isn’t going to have a ton of trouble keeping them in stock.

Jack Eichel seeing the USA Olympic jerseys after fighting to get his surgery for a chance to play in the games pic.twitter.com/Lj3rkojgHf

after seeing the USA’s jerseys for the Olympics, I am suddenly much more happy with Canada’s

These look like shitty generic soccer jerseys from Walmart.

.@usahockey has the best jersey in sports. No reason to ever wear anything different. pic.twitter.com/zDteYFbFg8

These look like shitty generic soccer jerseys from Walmart.

It really shouldn't be that difficult to throw together great Canada/USA Olympic jerseys. The colors are good, the looks are iconic. You honestly have to go out of your way to screw it up.

USA Hockey continues to miss the boat with their Olympic jerseys. There are so many better options. pic.twitter.com/hAJCv06bd8