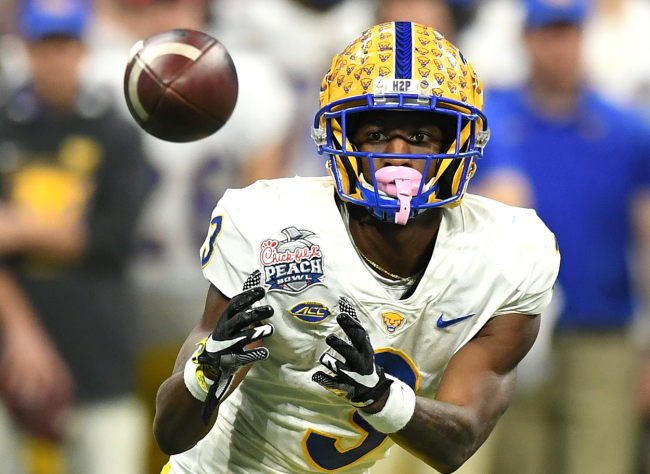 Jordan Addison’s decision to transfer out of Pittsburgh was one of the biggest and most controversial stories of the college football offseason. The reigning Biletnikoff Award winner, given to the best receiver in the FBS, ultimately ended up at USC and is set to play a crucial role in the Trojans’ offense.

To get to that point, it was quite the process.

The entire Addison saga began in late April with a eye-popping report. It said that he was set to transfer to USC and that a big NIL package was attached.

A few days later, Addison’s name officially appeared in the portal. At that point, his list of suitors was down to five.

Considering that Addison may have turned down a high six-figure NIL deal to transfer to an SEC East program, an expensive bidding war was likely set to unfold. Ultimately, the decision came down to Texas, USC and Alabama.

Many Oklahoma fans, after seeing what happened with Caleb Williams, believed that Riley was behind the smoke. They may or may not have been right, because in the end, Addison ended up committing to USC.

It is unclear as to whether NIL played a part in Jordan Addison’s decision to play for Riley and Southern California.

No details have been released about Addison’s reported package. There has been no indication that he has signed a single deal. He has not announced any partnerships. He has not posted any sort of promotional content to his social media.

However, Gerry Hamilton, a Senior National Recruiting Analyst at On3 Sports, says that promises were made to Addison. Although Hamilton did not share what the promises were, he made a significant claim about the star receiver and how he is feeling.

According to Hamilton, “Addison has been pissed in recent weeks because what he was promised hadn’t been followed through on.”

All that Hamilton said was that Addison “has been pissed” about promises that have not “been followed through on.” He left the rest to interpretation.