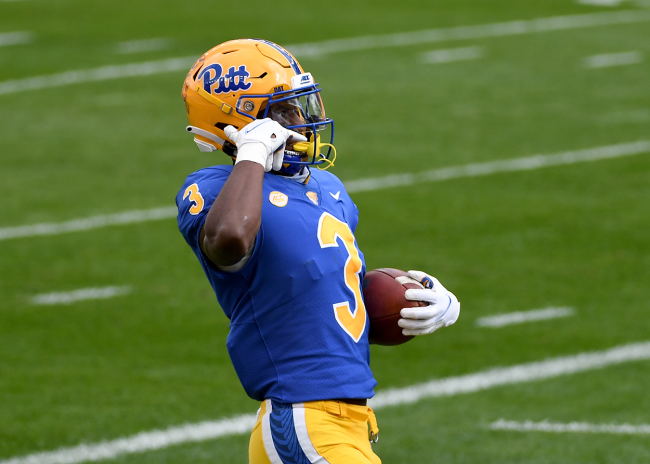 Before Jordan Addison officially entered the portal on May 1st, there were reports that the Pittsburgh wide receiver was set to transfer to USC. In doing so, he was said to be receiving a lucrative deal for his Name, Image and Likeness.

As a result of the reports, it set off a wild chain reaction. Pittsburgh head coach Pat Narduzzi even called Lincoln Riley to express his displeasure with what he believed to be tampering with his star wide receiver.

Shortly thereafter, Addison’s name officially hit the portal. At that point, his list of suitors grew to at least five.

Considering that Addison turned down a high six-figure NIL deal to transfer to an SEC East program, an expensive bidding war was set to unfold. Ultimately, the decision came down to Texas, USC and Alabama. Many Oklahoma fans, after seeing what happened with Caleb Williams, believed that Lincoln Riley was behind the smoke.

Despite the fact that Addison was working out with Bryce Young, Nick Saban’s refusal to participate in what he believes is “pay-for-play” may have kept the Crimson Tide out of contention. That left the Trojans and Longhorns.

Addison visited Austin earlier this month. While he was there, Texas rolled out the red carpet. He also received a new Instagram follower that may have hinted at his NIL potential if he chose the Longhorns.

However, in the end, Jordan Addison committed to USC on Thursday.

Because of how things played out, many college football fans believe that Addison’s interest in schools that weren’t USC was a rouse. They feel as though, just like Caleb Williams, the visits were intended to make it look less like tampering.

Among the salty fans, there are quite a few Pittsburgh Panthers that are upset. Except for Aidyn Strother-Tressler, who handled it with class.

Thank you for helping lead Pitt to a magical season and an ACC Championship. Best of luck in SoCal JA.

Here are some of the reactions to Addison’s commitment to the Trojans that are not as gracious:

This is big big big big cap. This was done two weeks before he even entered https://t.co/ZialCfwQpx

i doubt this was a hard decision

We don’t hate you Jordan, we hate that USC had to manipulate the new transfer and NIL rules to get you. Good luck and H2P!

Nice @LincolnRiley , have him announce while everything is going on in the SEC. Well played sir. pic.twitter.com/3AiAmEP2Lm

Congrats. But you can drop the H2P outta there. You will never be considered a Pitt man.

Will always root for you but don’t get how money takes over loyalty, PITT gave you a chance when USC didn’t even have you in their radar before you got to show the world your true talent. PITT had the faith and to do them like that just stings.

Not surprised. Lincoln Riley isn’t half what narduzzi is, but I’m glad you got your bag. Thanks for helping out pitt bc we boutta sue usc for millions for tampering🔥LFG

Don’t let the door hit ya’

This was your plan the whole time

“I was paid $3.5 million to play football for USC”

With the reigning Biletnikoff winner headed to Los Angeles, the Trojans are going to be very, very good. It’s a total boom or bust first year at USC for Lincoln Riley.