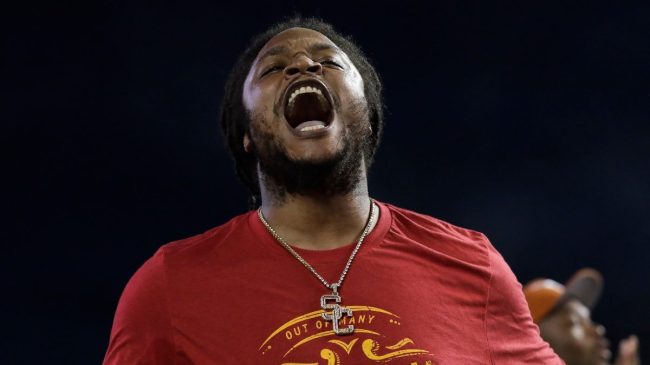 Reggie Bush is still asking for his Heisman back as he claims the NCAA conducted a lazy investigation against him. However, things might have taken a turn as former USC teammate and running back LenDale White might have spilled the beans on what was going on behind closed doors.

During a guest appearance on Bussin’ With The Boys, former USC running back LenDale White opens up about his time in college. Apparently, when he first moved to Los Angeles, he claims he “found a duffle bag filled with $150K cash in his apartment when he moved in.” Listen to his full statement below.

LenDale White found a duffle bag filled with 150K cash in his USC apartment when he moved in.

That’s a pretty cool story. I mean, who doesn’t wish they could just “find” a duffle bag of money in their apartment? Regardless, this likely doesn’t bode well for Reggie Bush at all. Especially considering he’s made some bold claims about the NCAA recently. If USC and/or its boosters were allegedly paying LenDale White, then it’s hard to imagine Bush wasn’t potentially receiving some sort of payment too.

With Reggie Bush still trying to get his Heisman back, White’s comments are certainly not helping. Even so, Bush can certainly continue denying that he received payment from USC or its boosters. Maybe he’ll make another announcement after LenDale White spilled the beans on his situation with the Trojans? But the best move would be to remain silent.

At the end of the day, it’s still a hilarious story from White.