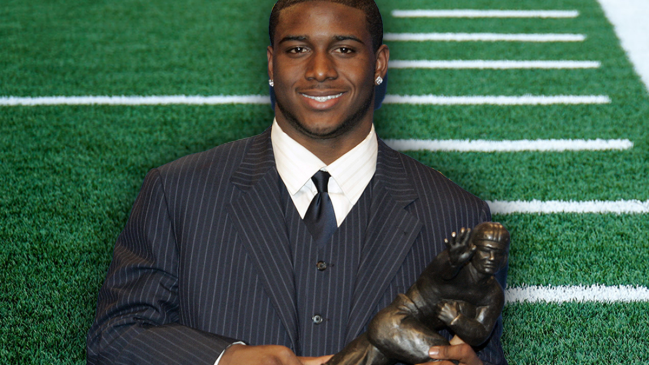 It’s been over a year since the NCAA changed its longstanding policy prohibiting student-athletes from profiting off of their name, image, and likeness, which has been a largely welcome shift for players despite the controversy and drama we’ve been treated to thanks to the fairly ungoverned nature of the Wild West schools around the country were thrust into practically overnight.

Since then, we’ve seen some absolutely massive NIL deals get signed and entered a world where people no longer bat an eye at players driving around campus in a Bentley—a development that makes some of the “scandals” that rocked the world of college sports in the Pre NIL Era look positively quaint in comparison.

That includes the case of Reggie Bush, who was stripped of the Heisman Trophy he won during his standout junior season in 2005 following an investigation the NCAA conducted with USC, which also stripped its campus of all acknowledgments of the star running back (who was banned from interacting with his former school and program over the course of a ten-year “dissociation” period that ended in 2020).

Bush has never admitted to any wrongdoing, and now, he’s come forward with new details while putting the NCAA on blast after revealing he’s on track to get his Heisman back after reason seemingly prevailed more than a decade after he had it taken from him.

Bush was the guest of honor on the most recent episode of the I Am Athlete podcast, and during the conversation, he revealed what went down behind the scenes when the trophy was taken away in 2010 after saying the folks at the Heisman Trust—which passed the buck to the NCAA while addressing the matter last year—recently agreed to reverse their decision to force him to give it up.

Here’s what he had to say (the segment in question kicks off around the 31:00 mark in the video):

I interviewed with one guy from the NCAA and that was it. The Heisman Trust and the NCAA are two separate businesses. They don’t work together.

The issue with that is the NCAA didn’t do their homework, which led to a bunch of lies.”

Bush said the tides began to turn when former Trojans (and current Buccaneers) running back coach Todd “T-Mac” McNair settled a defamation lawsuit against the NCAA over the summer; McNair was essentially the primary “witness” against Bush, but was reportedly paid $8 million by the governing body after it improperly linked him to the allegations surrounding the program’s star player.

As a result, the Heisman Trust apparently changed its tune, and Bush decided to share some details concerning the situation that led up to the initial fiasco in an attempt to provide some perspective:

“If you go back and read the report, it’s very vague on the things that they’re alleging that I did. The other thing you have to understand is my case is built off of hearsay. No factual evidence. The NCAA never proved anything.

They said we were taking money and I guess that was it. Here’s the thing about the house: they never spoke to my parents. Never. Not once. I’m the only person who was investigated and had a conversation with the NCAA…

Now they’re in a spot where they’re looking for a crib. They got nowhere to go. Some guys that are family friends of ours—one of the guys, named Michael Pettiford—owns a house. I think part of his business was real estate. He’s got a couple different properties.

So my parents move into this house as a last-minute resort because all of this was sudden…When they moved into this house, it was kind of like a short-term just to help us move into a place until they could find where their next place was going to be.

But that house was the house the NCAA plastered all across the world as if this was a house that was given to us as part of my name, image, and likeness being sold…The NCAA does not know that original piece of information right now. They have never ever, heard that because they didn’t do their homework.”

“Well,” you may be thinking, “If he was innocent, why did he give up his Heisman Trophy so easily?” I’m glad you asked!

The co-hosts of the podcast joked they would’ve simply told the Heisman foundation they’d “lost” the trophy if they’d attempted to get it back from them, but Bush had a pretty valid reason for handing it over without a fight:

At that time period, I did not know when it would come back, but I knew at some point in time I was going to get the Heisman Trophy back.”

It took around 12 years, but it looks like he was right.