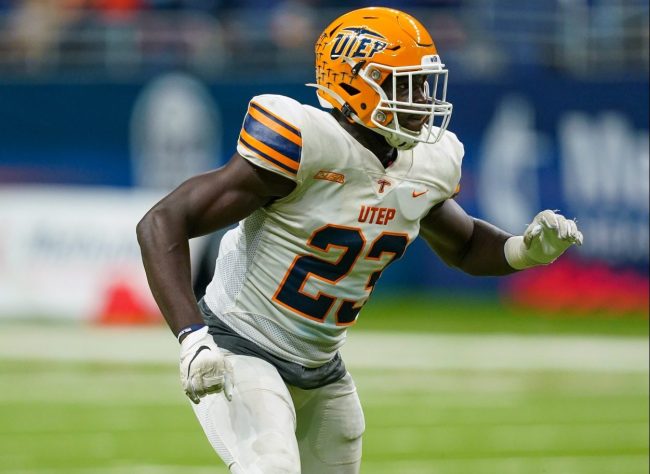 The people who say that there are too many college football bowl games are wrong. There are few things better than an 11:00am kickoff between two Group of Five programs from a random location sponsored by a company that you’ve never heard of.

Far more importantly, it’s not about you. It’s about the players.

After putting in the hard work over the course of a long season, the athletes are given one last opportunity to end the year on a high note. They get a free vacation, sometimes to somewhere awesome like the Bahamas, and get to leave with a swag bag that is usually pretty awesome.

In terms of the game itself, it’s a chance for the players to get additional reps and for the seniors to have one last chance to suit up for a program that they poured their heart into for as many as six years. But it also comes with the opportunity to let loose and have a little fun.

That was the case on Friday night as UTEP geared up to face Fresno State in the New Mexico Bowl.

Praise Amaewhule not only has one of the best names in college football but he embodied the spirit of bowl season. The redshirt sophomore from Katy, Texas was born in Nigeria and went to UTEP because nobody else wanted him. Now he is a solidified monster in the pass rush.

He also has some serious dance moves. During the Miners’ pep rally on Friday, Amaewhule took a moment to break it down with the band.

Look at the joy on his face, the faces of the band members and the faces of all those around him. The people who say that there are too many college football bowl games are wrong.