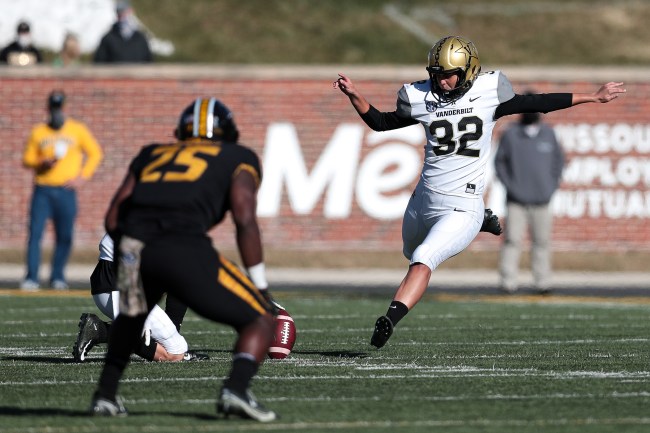 Vanderbilt’s football season has been a complete and total disaster. While expectations for the Commodores this season were already extremely low, nobody thought this team would be this terrible. The Dores are 0-8, with five of those losses being by 21 points or more.

Vandy firing head coach Derek Mason following a 41-0 loss to Missouri a week ago and putting the school’s women’s soccer team goalkeeper on the roster as a kicker is the only reason the program has been remotely relevant this season.

Now, heading into its regular season finale, Vanderbilt has a number of players reportedly considering opting out for what will be a drumming in Athens on Saturday. According to The Tennesseean’s Adam Sparks, interim head coach Todd Fitch said the team is “currently above the mark” of the required 53-man roster, but that could change between now and Saturday’s contest.

It probably wouldn’t be a bad move for Vandy to somehow find a way not to play Georgia this weekend if we’re being honest here.

With a few players considering opting out, does Vandy have 53 scholarship players for Georgia game?

Interim coach Todd Fitch said they are currently above that mark, but they've never been too far above it.

He hopes things "are settling down" now.

While the Georgia game won’t be a game at all, Vandy is still expected to roll with Fuller in some sort of kicking capacity as she will travel with the team. She became the first female to play in a game for a Power Five program as she kicked off the second half against Missouri.

Not only did Fuller appearing in the game create major headlines, so too did the speech she decided to give during halftime in which she called out her teammates for not cheering each other on. Vandy trailed Missouri 21-0 at the half, so it’s understandable that the players weren’t too thrilled in the locker room.

Vanderbilt added Fuller to the roster as a number of the team’s special teamers were sidelined due to COVID-19 protocols. She may have some competition for the Georgia game in the kicking department as the Dores could reportedly add their 2019 kicker, Ryley Guay, who is a med student that still has one year of eligibility remaining. Guay, who would need to be given eligibility by the NCAA, went 22-for-33 on field goals during the 2018 and 2019 seasons.