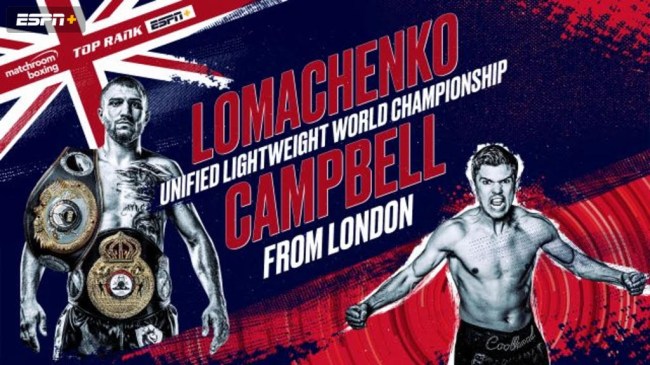 Looking at the boxing landscape, there’s a top echelon of guys who are dominating the sport, guys like Canelo Alvarez, Bud Crawford, Errol Spence Jr., Gennady Golovkin, and Oleksandr Usyk. There’s also the three-headed heavyweight monster of Anthony Ruiz, Tyson Fury, and Deontay Wilder, but how many of these world-beaters own a pair of Olympic gold medals? And how many of them won a world title in their very first professional fight?

But Lomachenko does, and Lomachenko did, and he’s defending his WBA, WBO, and The Ring lightweight titles this Saturday, August 31, live on ESPN+, taking on Luke Campbel at the 02 Arena in London. The action all goes down at 5:00 p.m. Eastern Standard Time, 2:00 p.m. on the West Coast. Additionally, the vacant WBC belt is on the line because, well, why not have all the belts?

The thing about Lomachenko is really his footwork.

Sent to ballroom dancing classes as a child by his father, Lomachenko developed the most perfect steps in the boxing ring. His precision on the feet is so immaculate that he’s always in a position to deliver maximum force, always moving around the pocket, throwing hands while completely evading the opposition. It is truly a thing of art and beauty.

Lomachenko really is the full package. He’s got power. He’s got great defense and head movement, and he likes to put on a show for the fans.

For his part, Campbell plays perfectly into the Lomachenko narrative.

Also claiming gold at the 2012 London Olympic Games (at bantamweight), Campbell has won a few WBC belts during his 22 fight professional career, recording 14 knockouts. It’s a more than decent resume by any standards, but then you look back at Lomachenko’s most recent opponent, Anthony Crolla, another Brit, and you realize how far ahead of the game “Hi-Tech” really is.

Promoted by boxing legend Bob Arum and Top Rank Boxing, Lomachenko has been a hot commodity ever since turning pro in 2013. But it hasn’t come without some adversity.

Losing his second professional fight by split decision, “Hi-Tech” has looked human in the ring before, but that was more than five years ago, and ever since, he’s been on an absolute tear.

From his fourth-round knockout of Crolla earlier this year that sent the Brit crumpling to the canvas face first, to forcing former two-time Olympic gold medalist Guillermo Rigondeaux to retire on the stool after the sixth round because the beating was just too bad, Lomachenko is putting together one of the great runs in boxing history, and he’s getting major attention, despite fighting at 135 pounds, a weight class that is often overshadowed by bigger, harder-hitting, muscle-bound fighters.

Oh, and he’s doing it on an easily accessible streaming platform like ESPN+, which is honestly a major steal compared to the days of the now-defunct HBO Boxing. It’s like Lomachenko is giving you a gift, you just have to want to receive it.

So, if you like boxing, there’s no reason you shouldn’t be watching every Vasyl Lomachenko fight. He may not have the big name like Ruiz, Canelo, Wilder, Crawford, or Fury, but all things equal, he boxes the hell out of all those dudes. Actually, none of them touch him because he’s just so freaking fast and perfect in everything he does.