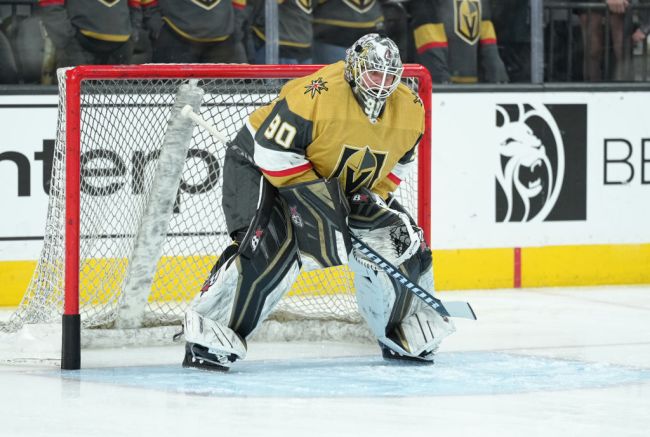 It is no secret to hockey world that the goalie position for the Vegas Golden Knights has been kind of a mess for a couple of years now.

It all started at the 2020 trade deadline when the Knights decided to trade Malcolm Subban and a 2nd round pick to acquire Robin Lehner in spite of the fact that they already had Marc-Andre Fleury starting in goal.

Lehner and Fleury then formed a platoon that nobody in Vegas was happy about until the playoffs rolled around and Lehner became the full-time starter. The people of Las Vegas remained unhappy.

Lehner was a free agent that offseason, but the Knights decided to bring him back with a yearly $5 million cap hit because they had sworn not to trade for rental players at the deadline. So, they now had $12 million per year in cap space being used on goalies and a rotation that nobody was happy about.

That following season, Lehner spent a large chunk of the season injured and Fleury won the Vezina Trophy, once again calling into question why the Knights needed 2 startle goalies.

Cap issues due to their large goalkeeping expenditures led them to finally solve their issue at the position. Of course, they did it in the worst way possible and got nothing in return for Fleury, who has since been traded again for at least a 2nd round pick.

With Fleury gone, Lehner became the clear starter for the team, but has once again spent a ton of time injured and has seen his save percentage drop as his goals against average has had a huge rise.

Now, with 4 games left in the season and the Knights barely clinging to hopes of making the playoffs, it has been reported that Lehner will be undergoing season-ending knee surgery. Only, head coach Pete DeBoer says that isn’t true.

Golden Knights coach Pete DeBoer said the reports Robin Lehner is undergoing season-ending surgery are not accurate to his knowledge.

"It was a maintenance day today. I expect him at practice tomorrow and I expect him dressed on Sunday." #VegasBorn

This latest strange chapter in the ridiculous story of goalkeeping for the Vegas Golden Knights comes right after DeBoer’s strange decision to blame Monday’s loss to the Devils on Lehner, start him against the Capitals on Wednesday, and then pull him after a 1-1 first period.

This also comes in a season where the Knights tried to trade Evgenii Dadonov to one of the only teams in the league he couldn’t be traded to, only to have the deal voided after the trade deadline.

I guess now all we can do is wait and see whether it will actually be Lehner or Logan Thompson in goal on Sunday against the Sharks as the Knights continue to handle this position in the most bizarre way possible.