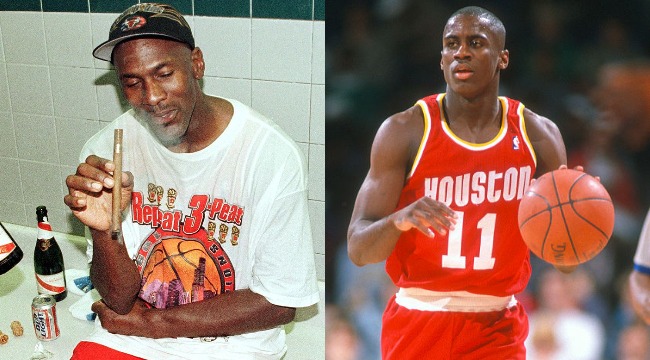 Vernon Maxwell had Michael Jordan’s number in the early 90s, holding MJ to a pathetic 29.2 points on just 48.0% shooting, down a full two points from his typical averages of 31.4 points per game on 51.7% shooting in those years. What a bum. Jordan don’t want Mad Max’s smoke.

Maxwell, who was a good enough basketball player to play 13 seasons in the NBA despite his affinity for firearms in the workplace, is one of the few humans—dead or alive—who has experienced any success against Michael Jordan’s Bulls.

The Rockets went 5-1 against the Bulls in Chicago’s first three championship seasons of ’91, ’92, ’93, and Maxwell averaged 18.3 points on 51.3% shooting versus the Bulls, according to Rockets Wire.

Mad Max appeared on the Ringer’s Real Ones podcast with Raja Bell and Logan Murdock in an interview that requires a seatbelt, and explains what it was like to guard Michael Jordan in a response that required 5 muhf*ckas.

“When you play against that muhfucka, you gotta be a lil different.”

Vernon Maxwell with an epic rant on what it’s like to guard Michael Jordan pic.twitter.com/riIBpvAolB

Video evidence that Mad Max was not afraid to poke the giant.

Maxwell has admitted in the past that “unlike most,” he was never intimidated. In fact, he legitimately wanted to “fight” MJ, which isn’t surprising coming from a guy who would strap up before playing against accountants at YMCAs across America.

I loved going up against Mike. He was the best. There is no disputing that. But unlike most people who went up against him I wasn’t going allow myself to be intimidated. He might’ve been the best but he was going to have to prove it each and every time we faced off. #TheLastDance pic.twitter.com/2deYxuMzY1