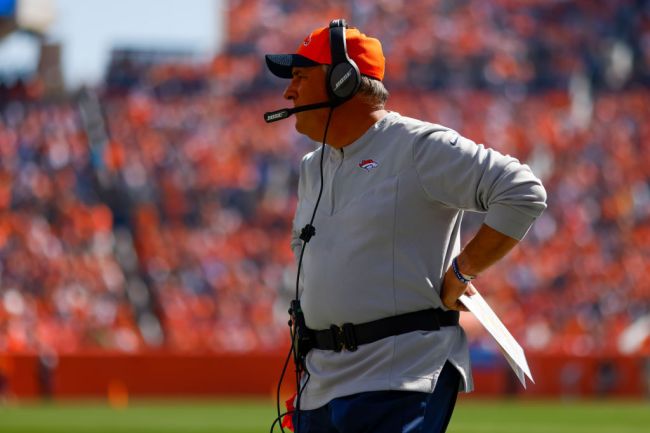 The Denver Broncos are not happy with the Baltimore Ravens for deciding to run the ball instead of kneeling on Sunday.

On the final play of the game against the Broncos, the Ravens were four yards short of continuing their 42 game streak of having at least 100 team yards rushing. The 42 game streak was one shy of the Steelers’ streak of 43 games with 100 rushing yards that was set in 1977.

Considering the game was already decided, Broncos coaches, including head coach Vic Fangio, were seen cursing the Ravens on the sideline for deciding to run the ball on the final play.

WATCH: The Broncos sideline was enraged as the Ravens decided to run the ball on the final play of the game rather than take a knee. #9sports #BroncosCountry pic.twitter.com/QshWgAbkpX

According to 9NEWS video, Broncos’ defensive line coach Bill Kollar recognized what the Ravens were doing pre-snap and started screaming obscenities. Defensive lineman Shelby Harris also saw what it was up and he started uttering his displeasure at the perceived lack of sportsmanship.

Broncos head coach Vic Fangio was upset enough he moved down to the line of scrimmage at the 20-yard line and tried to get his defensive backs, who were in a relaxed state anticipating the kneel down, to move up into the play.

When Jackson rushed for 5 yards to surpass 100 yards, Fangio threw down his headsets in disgust.

Ravens HC John Harbaugh defended his decision to run the ball because he felt preserving the streak was “meaningful.:

It’s one of those things that’s meaningful,”“It’s a very, very tough record to accomplish. It’s a long-term record. So, I’m not going to say it’s more important than winning the game, for sure. It’s certainly not. But, as a head coach, I think you do that for your players and you do that for your coaches, and that’s something they’ll have for the rest of their lives.”

Update: Broncos HC Vic Fangio ripped the Ravens to shreds during his press conference on Monday.

Vic Fangio on the #Ravens running the ball instead of kneeling so they could secure a 100 yards rushing for the 43rd straight game: "I thought it was kind of bullsh*t but I expected it from them. That's their mode of operation. Player safety is secondary." pic.twitter.com/190rRdHa54