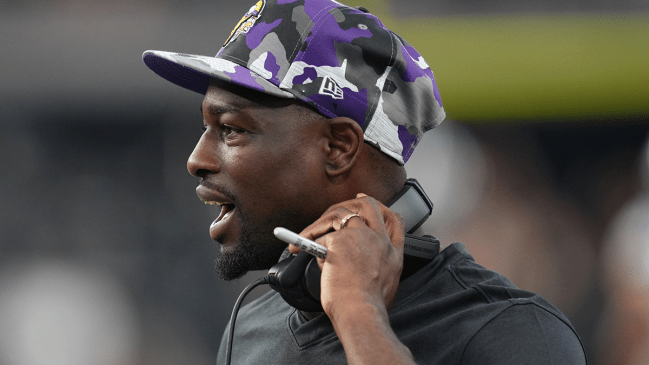 The NFL is filled with the kinds of physical specimens who can be politely described as “freaks of nature” thanks to the nature of a game that largely revolves around remarkably muscular humans routinely running into each other at seemingly impossible speeds.

It can be kind of hard to appreciate just how yoked many pro football players are unless you get a chance to get up close and personal with some of the Absolute Units who play the sport for a living—including a few who possess an especially notable physique capable of impressing people who’ve spent a good chunk of their life surrounded by some of the best athletes on the planet.

There’s no one in recent memory who’s garnered more of that particular type of praise than Saquon Barkley; in 2018, Eli Manning admitted he had trouble stopping himself from staring at the tree trunks the Giants running back has for legs, which Channing Crowder described as “beautiful” when he sat down with him for an interview where he contributed to the campaign to normalize guys complimenting dudes on their physique.

Now, it appears we can add Viking special teams coordinator Matt Daniels to the list of people who’ve implicitly endorsed that movement based on what he had to say about Jalen Reagor.

Reagor was traded to Minnesota at the end of August after spending the first two years of his career in Philadelphia. While with the Eagles, he served as a wide receiver and punt returner, but he became Public Enemy No. 1 in the City of Brotherly Love after muffing two punts last year’s playoff showdown against Tampa Bay that would mark the end of his time in Philly.

However, it appears Daniels is very confident he’ll be able to turn things around after arriving in Minneapolis, as the coach cited Reagor’s “big glutes” and “really nice calves” (among other features) while explaining why he’s been “salivating” over the possibility of seeing him in a Vikings uniform.

Vikings special teams coordinator Matt Daniels on Jalen Reagor, whom he has had respect for as a punt returner for some time: "He's a very stout, cocky-built guy. Narrow. Thick. Strong legs. Big glutes. Really nice calves. I was salivating over this dude."