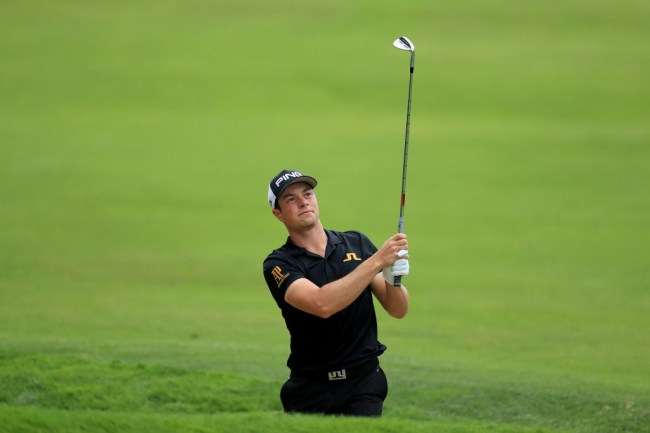 Viktor Hovland turned professional at this year’s Travelers Championship in late-June. The Norwegian has been a professional golfer for all of 119 days, but he’s already broken a 36-year-old scoring record.

During what was just his 25th professional round on the PGA Tour, Hovland carded a first-round 69 at the CJ Cup at Nine Bridges. It marked his 18th consecutive round in the 60’s snapping Bob Estes’ record set in 1983 of most consecutive rounds in the 60’s.

Viktor Hovland's 18th-straight round in the 60s is the most by any player on TOUR since 1983.#LiveUnderPar pic.twitter.com/1y2MMxBjhu

Not too bad for a 22-year-old in just his seventh PGA Tour event since turning professional.

Hovland had tied the record with a final-round 64 at A Military Tribute At The Greenbrier in September. During the run, he carded a 64 three separate times, in fact.

Here’s the round-by-round breakdown through the absolutely insane run:

What’s wild is throughout this entire run, his best finish was fourth at the Wyndham Championship and his only other Top 10 was a T-10 at the Greenbrier. Do you think these guys are good, or what?

The hype around the former Oklahoma State player has been at a big-time level since he turned pro and rightly so. He won the 2018 U.S. Amateur, was the low amateur at this year’s Masters and broke Jack Nicklaus’ 72-hole scoring record for amateurs at the U.S. Open where he finished 12th.

Hovland sits in a tie for 15th after day one of the CJ Cup while Byeong Hun An leads after his opening round 64 in South Korea.