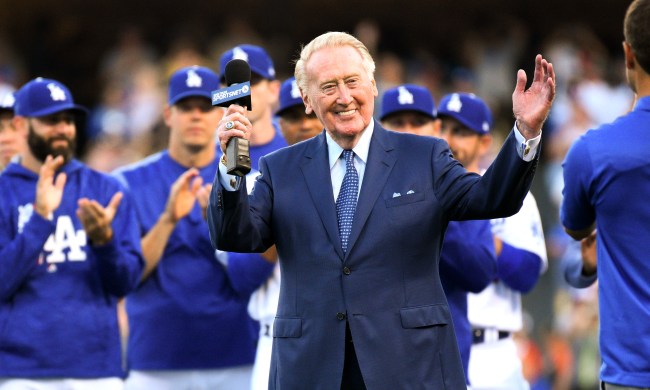 If ever there was one man who could read the pulse of a nation’s people and then eloquently put into words what it is that he sees, throw in a dash of optimism, and give everyone a little perspective, that man would have to be legendary Dodgers broadcaster Vin Scully.

Scully, now 92-years-old and three seasons removed from the broadcast booth, shared his thoughts on the current crisis and being quarantined in California with Bill Plaschke of the Los Angeles Times.

At he and his wife Sandi’s age they have been unable to have any real contact with anyone, from family members to friends, as they fear making them sick.

“It’s a very difficult time to go without hugs, you know?” said Scully.

He is still optimistic though, both for the country as well as for the national pastime.

“From depths of depression we fought our way through World War II, and if we can do that, we can certainly fight through this. I remember how happy and relieved and thrilled everybody was … when they signed the treaty with Japan, and the country just danced from one way or another. It’s the life of the world, the ups and downs, this is a down, we’re going to have to realistically accept it at what it is and we’ll get out of it, that’s all there is to it, we will definitely get out of it,” he told Plaschke.

“A lot of people will look at it, it might bring them closer to their faith, they might pray a little harder, a little longer, there might be other good things to come out of it,” Scully continued. “And certainly, I think people are especially jumping at the opportunity to help each other, I believe that’s true, so that’s kind of heartwarming, with all of it, it brings out some goodness in people, and that’s terrific, that’s terrific.”

Scully also knows that when baseball does finally return, “we’ve got this thing beat and we can go about our lives.”

“Somewhere along the line, I hope and pray that baseball will start up, that will be so wonderful, that will be a rainbow after the storm, that, yeah, things are going to get better,” he added.