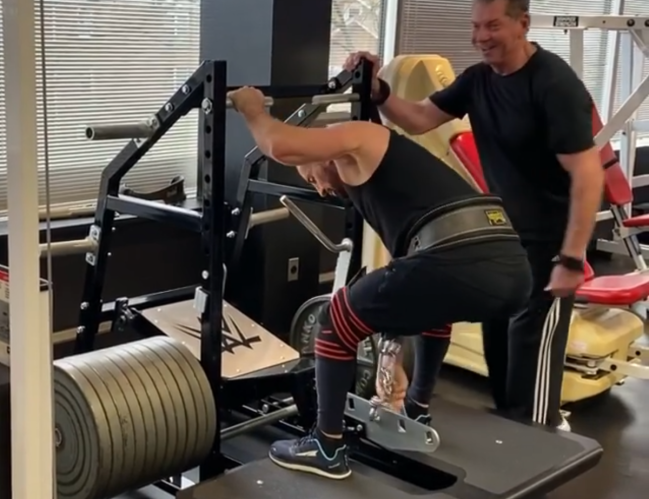 Earlier this month, we did a story about a guy who bought one of Vince McMahon‘s designer jackets at a thrift store. The new owner noted just how jacked Vince must still be for a guy his age.

This video posted by the WWE Corporate Trainer shows how the 75-year-old stays in such sick shape. In the clip, Vince is squatting close to 1,000 pounds, an obscene amount of weight for a man his age.

“Leg day!” writes Michael Monteforte, the corporate trainer to Vince and other WWE executives. “We did Leg Press, & Hack Squats before doing 20 Reps with 5 plates on each side, 10 Reps with 6, 5 Reps with 7, before trying our 1RM: Total 22, 45lb. Plates.”

Here’s Monteforte setting up the machine and busting out a few reps followed by Vince showing off his old man strength.

Not only is the WWE Chairman dedicated to moving massive amounts of weight around the gym but he’ll get in a workout at any time of day.

Earlier this month, Big E shared in an interview with the Hollywood Raw podcast that he’s witnessed McMahon putting in long drives pre-pandemic and immediately began working out, sometimes at three in the morning.

“He has a personal trainer and this poor guy. We have these long drives, pre-pandemic, and we’ll get in around two or three in the morning and his personal trainer has been standing outside the whole time waiting for him because he’ll come in and work out after shows and after long drives.”

Vince has been known to train seven days a week, sometimes even twice a day, and doesn’t seem like he’s going to slow down anytime soon.