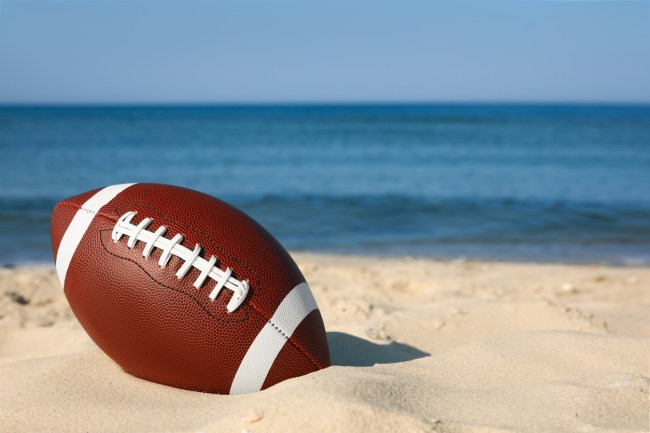 At the most eastern point of Long Island sits Montauk, a small village known for its beaches and strong Atlantic surf. Each year, as the dog days of summer bring the heat to the Northeast, it becomes a haven for people living in New York City to get away from the hustle and bustle on the weekends.

There are all kinds of coastal bars, day clubs and house parties in the evening and days are spent getting aquatinted with Ray Baker (aka the sun) on the beach. It’s the epitome of “summer vacation.”

Over the weekend, as it is every weekend from June to September, the beaches of Montauk were packed. And then, in a video that has since gone viral online, a hilarious dichotomy proceeded to unfold involving a football toss.

On the left side of the beach, a group of guys were playing football. It appeared to be 3-on-3 or 4-on-4.

On the right side of the beach, not far from the guys, two girls were having a catch with a football. It was just the two of them.

The video, which illustrates the difference in quality of play between the two groups, begins on the right. It shows a bikini-clad female with a football in her hand.

She proceeds to take a short step back before winding up, stepping into her throw, and releasing a bomb. It was a textbook, effortless throw with a perfect spiral that hit her target (who made a great catch) right on the money.

The video then pans to the guys on the left. It was not nearly as impressive. In fact, they got completely shown up.

The quarterback for the guys snaps the ball, looks to his receiver to the right and throws an absolute duck of an incompletion behind his man. He then looks at his intended target and throws his hands up as if it was his fault. It was not. The throw was terrible.

Take a look at the incredible moment caught on camera:

It is unclear as to who either quarterback is.

For the male, that’s okay— because he got completely embarrassed and should go into hiding. For the female, it is not okay. She is a legend and deserves proper recognition. In fact, the Browns are looking for a quarterback and they might want to look at this cannon-armed lady in Montauk.