Vlad Guerrero Jr. Gave Max Scherzer A Big Bear Hug After Nearly Taking His Head Off With A Line Drive 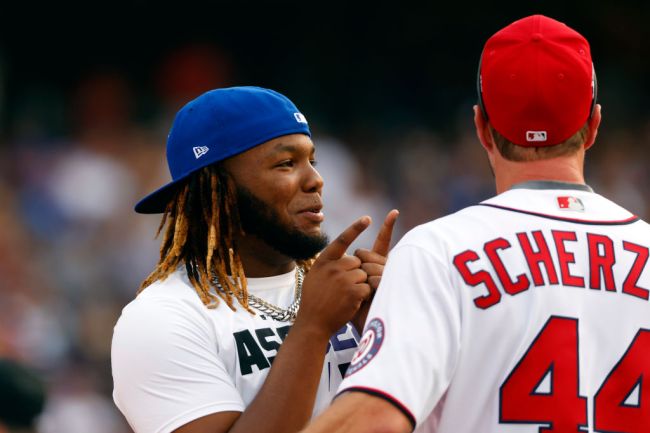 The MLB All-Star Game is the best all-star game in sports. The NBA All-Star Game is a scoring exhibition, the NFL Pro Bowl may as well be a flag football game and 3-on-3 hockey is fun, but not how the sport is played.

One of the highlights on Tuesday came with the second batter of the game. After Shohei Ohtani made history by being the first starting pitcher to leadoff at the All-Star Game, Vlad Guerrero Jr. came up to bat with one out.

Max Scherzer was the starter for the National League and got Ohtani to strikeout swinging. He had allowed two home runs in limited at-bats against Guerrero. Interestingly enough, he also allowed two to Vlad Sr. during his career.

Mad Max did not give up another. Guerrero Jr. sent the fourth pitch he saw screaming back at his head.

Fortunately, the pitch did not hit Scherzer, but it came awfully close. Adam Frazier made the play and Vladdy Jr. was out number two of the game.

On his way back to the dugout, Jr. swung by the mound and gave Scherzer a big ole bear hug. He felt bad.

Scherzer, who rarely shows any emotion outside of straight-up crazy, cracked a smile. He threw a 1-2-3 inning and was replaced.