Vladimir Guerrero Jr. Has Dropped Some Serious Weight Since The 2020 Season Began 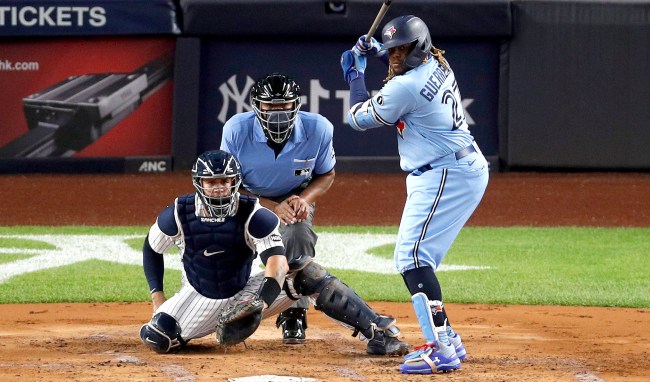 He’s lost over 30 pounds since.

“I did not get to the second [spring] training well, and I told myself that this cannot happen again,” Guerrero admitted to Dominican newspaper El Caribe. “I was overweight, I said that it couldn’t happen again and I got to work at once.

“Things happen because you don’t work. I finished the season more or less and put that in mind. I started with the slow swing and when I lost 20 pounds I started feeling better.”

Now he says he is down to 250 pounds with the eventual goal of a playing weight in the 240 to 245 pound range.

“I learned after these months of the coronavirus that if you don’t work hard you can’t be in the Major Leagues. Why do (Fernando) Tatis and (Juan) Soto put good numbers? Because they work hard,” he said. “I hit the hits I hit because of the ability that God gave me. But I knew it from the beginning. I know I did it wrong. I apologized to my teammates and decided to play like this, but I did it wrong.”

Guerrero, the son of Hall of Fame outfielder Vladimir Guerrero, says he is working out every day, has revamped his diet, and as a result has dropped 12 pounds since the season came to an end.

“Now I eat differently,” he said. “Nothing with fat and I have dinner at 7:00 at night. After that, it’s water until the next day.”