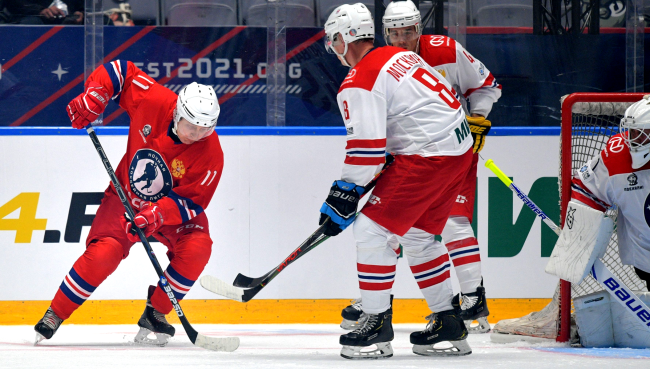 Russian leader Vladimir Putin, as he has been known to do in the past, crushed his competition, scoring eight goals in a totally legit “All-Star” hockey game in Russia this week.

The 68-year-old president of Russia, and judo black belt, looked like he sould have been playing in the 2014 Winter Olympics as he obliterated his opponents, the Night Hockey League, at the 10th Night Hockey League National Festival at the Bolshoi Ice Arena in Sochi.

Playing for the Hockey Legends team, Putin’s domination from the slot helped lead the Legends to a resounding 13 to 9 victory on Monday.

Putin, rocking the red number 11 sweater for the Legends, wasted no time, scoring his first goal within 30 seconds of the opening puck drop.

After the game, Putin presented legendary Russian hockey player Pavel Bure with an award from the state.

“I wish you all the best on the occasion of the tenth anniversary of the Night Hockey League,” Putin said, according to the official website of the President of Russia. “Along with making your own life more exciting and vibrant, more beautiful and meaningful, you are also setting a wonderful example for millions of other people. You are increasing your life span and improving the quality of life, giving it more meaning. Thank you very much for that.

“And of course, I would like to thank our wonderful hockey stars – not only those from Russia, but international players as well – for taking part in this huge project intended for the whole country, for a multimillion person audience. Thank you very much.

“The President of the International Ice Hockey Federation, Mr Fasel, is our guest today. Let’s welcome him. (Applause.) Thank you for not only supporting professional sports but also for promoting amateur sports, in this case in Russia. Thank you very much.”

After presenting a special prize to hockey player Oleg Smirnov, a representative of the Night Hockey League, Putin congratulated Bure.

“Pavel Bure has been awarded the Order for Services to the Fatherland IV degree for his outstanding achievements in high-performance sports and international sports and also for his attention to and development of amateur sports,” said the Russian President.

Putin’s scoring barrage matched his total from the last time he participated in the game in 2019 when he, coincidentally, also knocked home eight biscuits.

Check out a few more highlights of the unstoppable Putin at the 2021 All-Star event below.

Impressive, but has Putin ever shot 38 under par or bowled a perfect 300 game like Kim Jong-Il did back in the day? I didn’t think so.