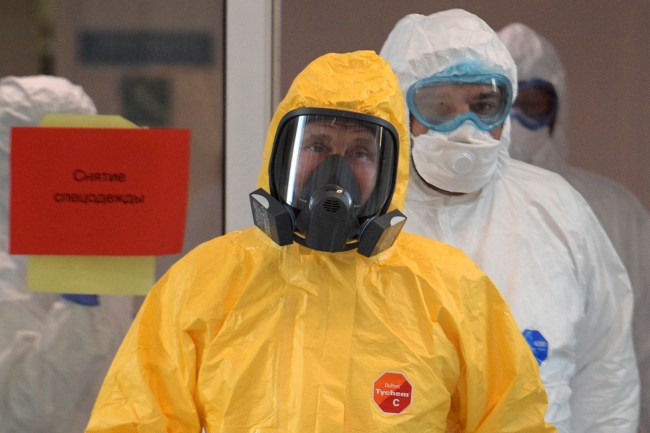 There would be no more fitting garnish to this shit-sandwich of a year than if Vladimir Putin became the hero.

The Russian President claims that he has locally developed a vaccine for COVID-19, the first in the world, and it has been given regulatory approval less than two months after testing on humans.

Putin is so confident in the effectiveness of the vaccine, developed by Moscow’s Gamaleya Institute, that he reportedly used it on one of his two daughters, BBC reports. It will reportedly be called ‘Sputnik V’ in foreign markets.

Experts have raised concerns, suggesting researchers may be cutting cornershttps://t.co/9s1tn9pdln

“As far as I know, a vaccine against a new coronavirus infection has been registered this morning, for the first time in the world,” he said at a meeting with members of the government, RIA Novosti reported.

“Although I know that it works quite effectively, it forms a stable immunity and, I repeat, has passed all the necessary checks,” Putin said.

“We have received preliminary applications for over 1 billion doses of the vaccine from 20 countries. Along with our foreign partners, we are already prepared to manufacture over 500 million doses of vaccine per year in five countries, and the plan is to ramp-up production capacity even higher,” the wealth fund said in a statement.

While Russia has denied its part of an “arms race” to be the first to develop a vaccine, American authorities on the subject are skeptical.

#Russia approves the world’s first #coronavirus vaccine, despite not having conducted Phase 3 field studies in tens of thousands of people to ensure that the #vaccine is safe and effective, nor publishing any data.

Dr. Scott Gottlieb, the former U.S. Food and Drug Administration commissioner, told CNBC on Tuesday he would “certainly not” take Russia’s vaccine outside of a clinical trial.

“They’ve cleared the equivalent, really, of a Phase 1 clinical trial in terms of putting it in 100 to maybe as many as 300 patients so it needs to be evaluated in a large-scale clinical trial,” he said on “Squawk Box.” Russia’s vaccine development is “certainly not ahead” of the United States, added Gottlieb, who is a board member of Pfizer, which is developing a potential vaccine. [via CNBC]

Russian officials have said they plan to start mass vaccination in October.

BBC reports that there are 100 vaccines around the globe that are in early development, with some of those being tested on people in clinical trials. Experts believe that none of these vaccines would become widely available until mid-2021.

Russia is that kid in class who you know didn’t study but finishes the essay exam first so he can go outside and smoke a cigarette.