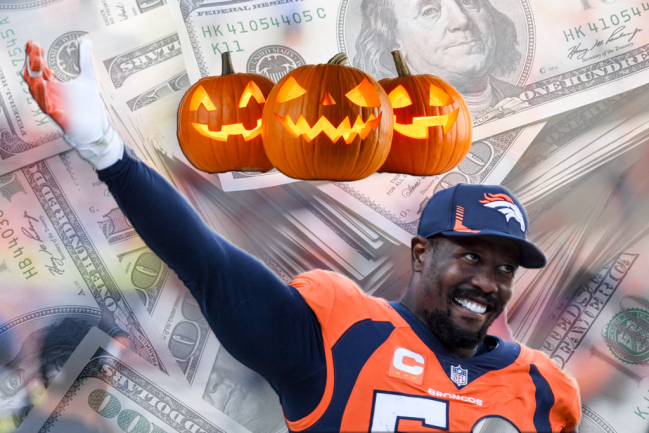 Von Miller is taking his Halloween party to Los Angeles. The 32-year-old linebacker has spent his entire career in Denver but was traded to Los Angeles on Monday afternoon.

NFL fans reacted accordingly to the idea of adding Miller to an already scary defense, and the Rams were thrilled to have him on board. While the trade came as a surprise to many, reports have since surfaced that the decision to ship him west might have been about more than just football.

According to Pro Football Network, the trade was made easier by a dispute over Miller’s legendary Halloween party. Apparently, he was upset with his teammates for declining to kick in on the six-figure price tag.

If you are unfamiliar, Miller is known to throw the biggest and best Halloween party in the NFL. In 2019, the epic banger led to Chad Kelly being chased out of a neighbor’s house with a vacuum.

This year, it featured a performance from Quavo of Migos.

Per the report, Miller requested financial help for the party, despite having earned more than $90 million in his career. He allegedly wanted rookies to kick in several thousand dollars for a party that they had no part in planning.

Meanwhile, Miller’s teammates were reportedly baffled by the request, assuming that they were invited as guests and not co-hosts. Seems fair.

PFN’s source even said that Miller threatened to disrupt Denver’s locker room chemistry over what he perceived to be an unpaid debt. Things got so blown out of proportion that head coach Vic Fangio and general manager George Paton even became aware of the issue.

Whether the party quandary factored into the team’s decision to trade Miller to the Rams or not, we don’t know. Either that, or the Broncos didn’t expect or didn’t want to bring him back in 2022 after he becomes a free agent at the conclusion of this season.

What we do know is that Miller will be having his party in the City of Angels next fall, assuming that he chooses to resign with the Rams. Party on, Von!