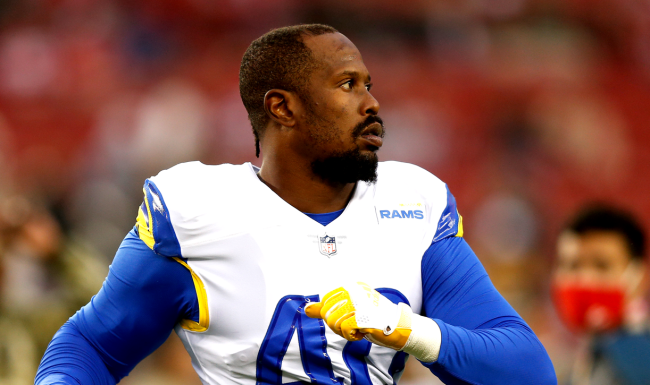 NFL linebacker Von Miller, recently acquired by the Buffalo Bills, is the subject of a new lawsuit by a woman claiming he shared private, explicit photos of her with “two well-known celebrities” in an act of “jealousy, anger, and rage.”

According to court documents obtained by TMZ, the woman was dating Miller in 2020 and in May of that year he shared the photos without her consent.

The woman, using the pseudonym Jane Doe in the lawsuit, claims Miller, “in a fit of jealousy, anger, and rage,” sent the first photo on May 7, 2020 to a celebrity with the message “This the b—h you want? You can have her dawg.”

Miller then, three minutes later, allegedly sent the same photograph to another celebrity with the message “This the b—h you want?”

“This case is a cautionary tale for young women that date professional athletes like Miller that think laws do not apply because of fame, money, and power,” the lawsuit reads. “However, professional athletes are not exempt from the law and Miller’s vindictive, manipulative and unlawful actions must not be overlooked.”

The woman is seeking unspecified monetary damages and a permanent injunction against Miller to stop him from sharing the alleged photographs of her. She claims she has suffered emotional distress, harm to her reputation, including shame, mortification, and embarrassment as a result of the photo leak.

“[Miller] committed the acts alleged maliciously, fraudulently, and oppressively, with the wrongful intention of injuring [Doe],” the lawsuit added.

Last year, Miller was reportedly under investigation for alleged domestic violence after allegations were made by his ex-fiancee Megan Denise. Denise, who released a series of nasty text messages Miller had sent her, denied any physical abuse and no charges were brought against him.