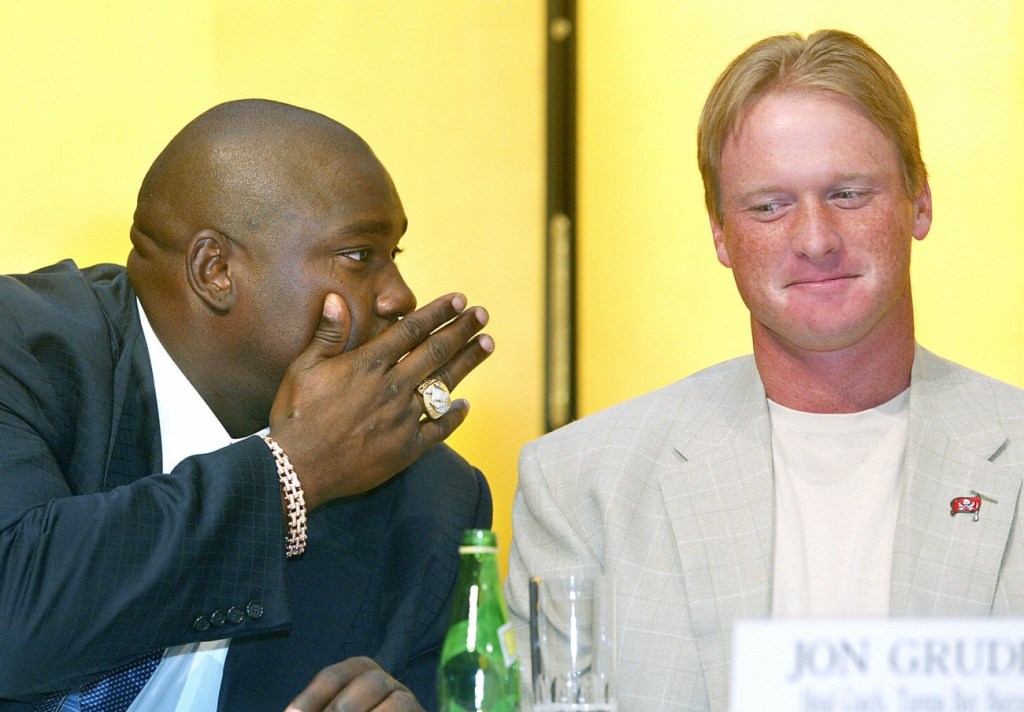 The careers of Warren Sapp and Jon Gruden were intertwined for several years. Gruden left his position as head coach of the Oakland Raiders to join the Tampa Bay Buccaneers in 2002. He then won a Super Bowl with Tampa in his first year there as head coach (with Warren Sapp) and it was against the Raiders who he’d just left.

Warren Sapp was with Tampa Bay from 1995-2003 but then left for the Oakland Raiders in 2004 where he’d stay until 2007 before retiring from the NFL. Jon Gruden would then take a break from coaching in the NFL after leaving the Buccaneers in 2003 until he went back to the Raiders in 2018.

Jon Gruden and Warren Sapp worked together in the 2002 and 2003 seasons. And as I’ve tried to lay out above, clearly their careers have been intertwined. So when Warren Sapp sat down with Vlad TV (video below) for an interview and was asked about Gruden’s allegations of racism, he had a lot to say.

First and foremost, Sapp doesn’t believe what Gruden said about NFLPA Director DeMaurice Smith is racist. Gruden is currently battling the NFL in a lawsuit alleging the league and Roger Goodell attempted ‘to destroy’ his career by leaking emails. The allegations are so serious one attorney recently predicted Roger Goodell ‘will lose his job‘ during this lawsuit.

Here’s the interview with Warren Sapp and Vlad TV. The discussion about racism comes around the 1:45 mark. I’ve also included a transcript below if you’d prefer to read instead of watching a video.

Full transcript of the exchange:

I bet this is the first time in DeMaurice Smith’s life someone called him ‘big lipped’ and he said it was racist.”

Warren Sapp: “That’s not racist. I asked a question I said, ‘what’s the racist statement?’ The rest of that is way out of line across the board. But you’re not going to call my head coach a racist.

I sat in front of him for two years and I’m a child of the South. I was raised in Florida. There’s no way a fire-breathing racist would be in front of me or on my speed dial and we haven’t had a real discussion about ‘your tendencies to not see the black man on your level’. There’s no way Jon Gruden’s that.

I’ll bet my life on it that’s the first time DeMaurice… ‘Big Lipped’ DeMaurice Smith said somebody called him ‘big lipped’ and it was racist.”

Vlad TV: “Okay, so the whole thing is overblown?”

Warren Sapp: “No. Just not racist. Just don’t put that tag on it.”

Warren Sapp is certainly the highest-profile figure I can think of who has come to the defense of Jon Gruden so far.

Gruden filed his lawsuit against the NFL in November 2021. A judge denied the NFL’s motion to dismiss on May 25th. Both parties now enter the discovery process while the NFL could still appeal the recent ruling.