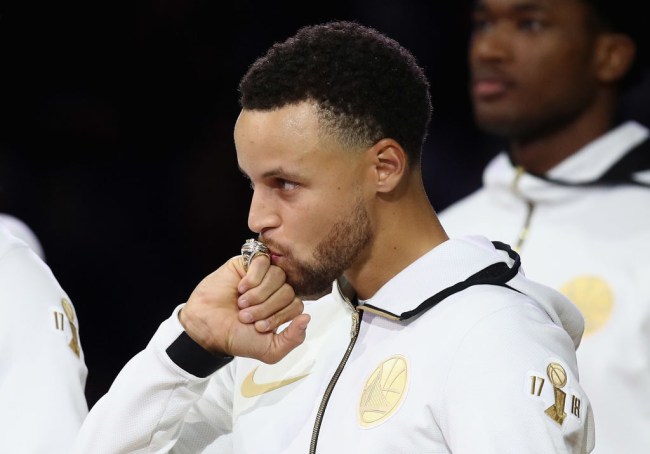 The Warriors have won three of the last four NBA Finals and if Vegas sportsbooks are any indicator, they’re raising a fourth banner come June. The ceiling is sky high for the Warriors in the next half-decade or so and I’m not sure how many NBA fans it would surprise if Steph Curry needs two hands to house his rings when his career comes to an end.

With that in mind, the Warriors decided to get a little experimental for their 2017 NBA Champion rings, which were presented to them prior to their regular-season opener against the Oklahoma City Thunder on Tuesday night.

The concept: reversible rings. The first of its kind.

First reversible championship ring ever! Jason of Beverly Hills coming through with some innovative work in the championship hardware department. 🏆💍 #DubNation pic.twitter.com/wlxCXZQuQw

The ring, which was created by designer Jason Arasheben, took 12-14 prototypes to nail down and feature seventy-four sapphires on the blue side represent the combined number of regular season and playoff wins by the Warriors in 2017. On the white side, 74 diamonds represent the same thing. The ring also includes 56 stones on the team side, one for each year the franchise has been in the bay, and a reversible face–the first of its kind–that’s silver on one side and blue on the other. The Warriors’ mantra, “Strength in Numbers,” is the first thing you see when the ring’s top is twisted off.

The Warriors' championship rings are reversible, have 74 diamonds and 74 sapphires, and throw a little shade at LeBron and the Cavs.

What are some things that are smaller than the Warriors’ championship rings? pic.twitter.com/3TASxaHbhI

The responses to the question: what are some things smaller than the Warriors’ championship rings are incredible.