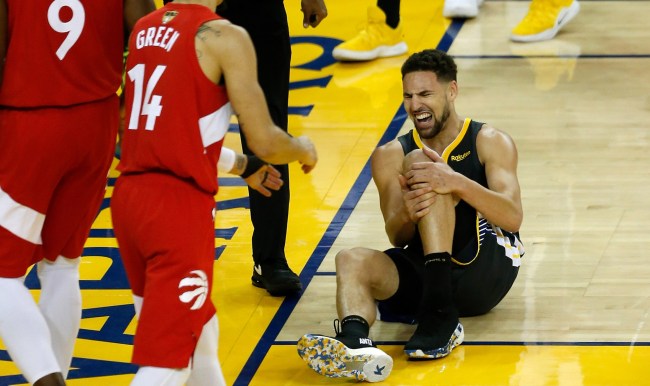 When a professional athlete goes down with a major injury we, as fans, usually only get to hear what that athlete and perhaps his coaches and teammates think about the situation after it happens.

Occasionally, that player’s opponents will also share a quick quote, wishing the athlete well or something to that effect.

Rarely do fans get to hear what was actually being said on the court or playing field between these athletes as the player receives medical attention.

So it is interesting to hear Raptors’ swingman Danny Green describe what went down on the court when he was inadvertently involved in Klay Thompson suffering a devastating knee injury during Game 6 of the NBA Finals.

During the media session following the Raptors’ win, Green explained what was said between him and the Warriors players as Thompson initially left the court only to briefly return to shoot his free throws.

This was the exchange between Klay Thompson and Danny Green after Klay came back onto the floor to shoot the two free throws after already tearing his ACL pic.twitter.com/lMLeLVKZM0

“I thought it was pretty clean. They called a foul … I wasn’t sure what happened and I just saw him grab his knee. You never know serious it is with him because he just walks through and plays through anything. The guy came back on the court like it was nothing with a torn ACL and shot his free throws.

“The rest of his guys, they were making sure that I didn’t take it the wrong way or feel too bad or guilty about it. It was a clean play.

“They were like, ‘We know you’re not dirty.’ Draymond [Green], Iggy [Andre Iguodala] they were like, ‘Yeah, you went up for the ball. He just came down funny. It’s not your fault. Don’t even worry about it.’

After Klay Thompson’s season-ending injury, the Warriors players reassured Danny Green that his shot contest was not dirty https://t.co/cu1Mn88GO9 pic.twitter.com/WMqwT5Bu13

“And I wanted to check on him at the foul line. He’s like, ‘I know you didn’t do it purposely.’”

“I didn’t know the severity of it until after the game … I saw [Draymond] in the hallway after and he said it’s an ACL and I was like ‘Ahhh, sh*t.’ It’s gonna be a long summer for not just him but their team.

“You never want to see those guys go down that way. They’re special players and you don’t want to see their careers changed, or be hindered or be over because of certain types of plays or injuries — especially the ones you’re involved in.”

Interesting insight into how players interact when an injury occurs to someone in their elite fraternity, to be sure.