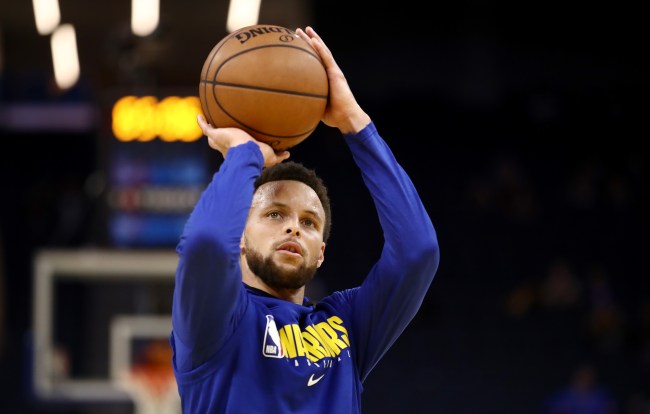 The Warriors’ Twitter account may be pretty savvy at times, but, damn, it had a major blunder the other day when it accidentally caught the team’s most lethal shooter, Steph Curry, putting in some work at the gym. No, Steph wasn’t giving away any secrets to his success, but, instead, appeared to be wearing his newest sneaker — the Curry8 Flow — which has yet to be released by Under Armour.

In a since-deleted video, the Warriors’ Twitter account showed Curry getting up some shots and wearing what looked like the Curry8 Flow, which is the three-time champ’s first signature show under his own brand at Under Armour. Take a look below to see the deleted video — which was captured by another user before it was removed by the team.

The Curry 8 is rumored to be the first sneaker released under Curry’s individual brand. Peep the new logo. 👌 pic.twitter.com/srHBcT0Gvy

From the site Lets Go Warriors, Steph Curry was filmed by members of the Warriors Twitter account by accident. But, making things even worse was the apparent reveal of his soon-to-come Under Armour sneakers.

This news, then, updates the previous report of a “re-branding” into what really amounts to a new brand launch, which includes the new logo we previously reported. Obviously, that new logo will be akin to what the Jumpman logo is to Jordan Brand, and different or separate than the Nike brand. In other words, Under Armour’s “UA” logo will no longer appear on any forthcoming Curry signature shoes.

Per another source, yesterday Stephen Curry was “accidentally” filmed working out at the Warriors practice facility while wearing the Curry8 Flow. The Warriors posted the video clip, but quickly deleted it. We’ve been told that Instagram user “dub_area30” managed to copy the video and reposted it before the Warriors deleted it from their @warriors account. Its deletion suggests, of course, that the shoes worn by Curry were indeed the Curry8 Flow.

Considering Steph Curry joins the GOAT, Michael Jordan, as the only athletes with their own brand with a shoe company — not just a signature line, as many others have — it seems like the Warriors’ Twitter account done fucked up. Thankfully, they were quick to remove the video to try and salvage the mistake, but, c’mon, the Internet always wins, so the apparent leak was inevitable.

It’ll be interesting to see if this means Curry and Under Armour go back and make some changes before the shoe’s official release in a few months, or if they just roll with the one that popped up on the Dubs’ social media before being deleted. Talk about a serious buzzkill if this is how fans got the first glimpse of Steph’s sneakers, huh? You just know the poor social media person at the Warriors is feeling like a real dummy right about now — but, hey, shit happens.