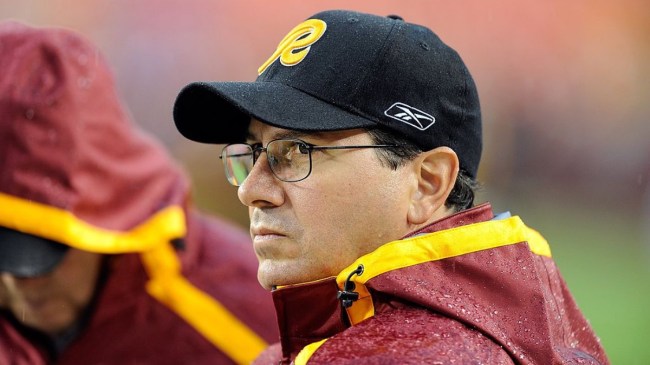 Despite it seeming like the football world has been talking about Dan Snyder forever, there have still been some wild reports popping up about him recently.

It was reported last week that Snyder was trying to dig up dirt on owners around the NFL and on Roger Goodell.

Irsay said he doesn’t care if Snyder might have dirt on other owners. “He can investigate me till the cows come home, it’s not going to back me off.”

He also added in that he thinks that removing Snyder is a road the league may need to go down.

“That’s probably the road we need to go down” — Jim Isray, on the possibility of removing Dan Snyder as owner of the Commanders

Now a Washington Commanders spokesperson has responded to Irsay’s comments.

In response to Jim Irsay’s comments on Dan Snyder…this is from a Commanders spokesperson. pic.twitter.com/5IghFBeaCx

It is highly inappropriate, but not surprising, that Mr. Irsay opted to make statements publicly based on falsehoods in the media. It is unfortunate that Mr. Irsay decided to go public with his statement today, while an investigation is in process, and the team has had no opportunity to formally respond to allegations. The Commanders have made remarkable progress over the past two years. We are confident that, when he has an opportunity to see the actual evidence in his case, Mr. Irsay will conclude that there is no reason for the Snyders to consider selling the franchise. And they won’t.

With Dan Snyder clearly uninterested in selling the team, the league would need a lot more than just Jim Irsay’s support to remove Snyder. They would need 75% of the owners to vote in favor of Snyder’s removal.