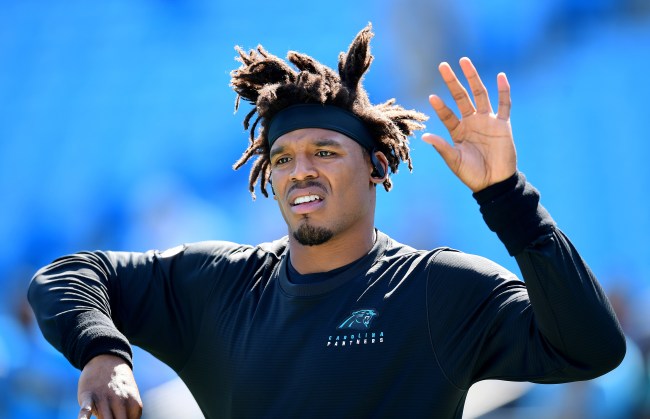 At long last, we are finally here. The glory that is the NFL season is upon us for the next six months and faithfully going along for the ride will be a sea of reliable, unwavering clown cars right in tow. Sure, we got a clunker on Thursday night, with the Packers beating the Bears 10-3. But that’s what happens when you put too much emphasis on a 100-year anniversary that no one outside of the NFL’s Park Avenue office cares about.

Thankfully, Antonio Brown more than made up for that gaffe by pulling a string of moves right out of the Costanza playbook and ultimately ending up as a member of the freakin’ Patriots after figuratively dragging the entire Raiders organization from the bumper of his car.

In a fashion sense, the lack of AB’s presence was dearly missed and some might even say, unfair!

But whatever, having said all that — in a sincere tribute to CNN’s always enthusiastic anchor Chris Cuomo — whaddya say, let’s get after it!

There’s no better transition from The Joker to… well, this.

Let’s see here, we have a custom short-sleeved suit, an estimation of 11 scarves, the expected pair of enormous shades, and one of Cam’s 3,000 hats from his highly coveted Zorro collection, not to mention what appears to some kind of barbed wire on top just for kicks.

If anyone is even remotely surprised by this look, just imagine if Cam’s hands weren’t cropped out. One can only assume he’s either wearing more bracelets than a teenage girl or two Panther heads with blinking eyeballs as gloves. You just never know where the route will end.

Cam Newton is a walking ”In Living Color” skit. Amazing. (via @MikeReiss) pic.twitter.com/TBtt6lqFEi

Consider the above photo was taken in late August, this appears to be a developing theme.

Then there was Giants receiver Sterling Shepard, who stepped out of his lane and went wild with a leather sling bag that matched his suit. Yes, we all have different definitions of crazy.

There’s really nothing to criticize here, which is kinda depressing. Love the color of the jacket, yet Brady also managed to keep things understated.

Casual and confident is key, but if he really wants to troll the hell out of people he’s gotta change up that generic haircut and either spike his hair to the moon or grow it out. I have no doubt his “personal nutritionist” can figure out a way to speed up hair growth.

For years I’ve been mocking Aaron Rodgers for sporting a freakin’ white undershirt with just about anything he’s ever worn and, in turn, spoiling each and every look. This right here is photographic evidence that it’s never too late to change. Finally.

Short and sweet with Dak on this one:

Great looking jacket, atrocious choice on the button-down. Those two things were never meant to even be in the same room together.

Well, this is a little ridiculous. First, check out this tweet I posted on August 29th.

Looking forward to another season of critiquing the very best of Big Ben’s Easter brunch attire. (Don’t let that smile fool you.) pic.twitter.com/hLSTWn7jNj

And now look at what Big Ben strolled into Gillette Stadium wearing. He’s either picked up on the mockery and trolling hard or decided to wear every conceivable shade of blue he could find in his closet.

Did he have brunch at an aquarium or something?

If you look at the full photo, you’ll notice even the god damn plastic bag he’s holding is blue. This is some next-level shit.

What can I say, Richard Sherman is a suave, natural-born showman. I need that jacket yesterday. Just outstanding.

Sometimes even when you’re barely trying, it still works. Travis Kelce is the perfect example of that approach.

Simply throw on a hat, a seasonal polo for the flight to Jacksonville, and showcase that chest hair like it’s 1984. 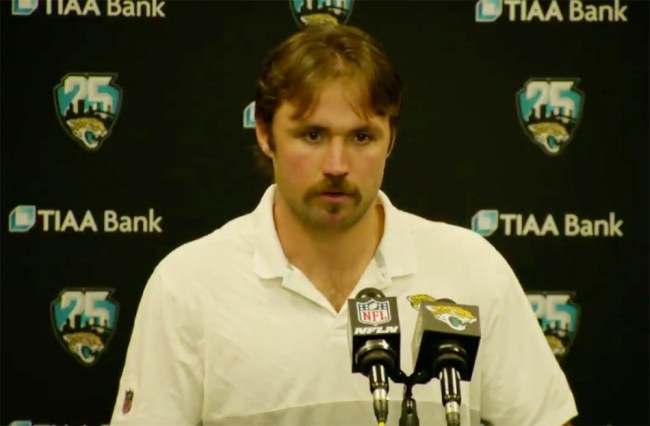 Speaking of 1984, it’s possible that in the mind of Jags’ backup QB Gardner Minshew it most certainly is 1984. The part down the middle in combo with that mustache has officially sent my brain into a tailspin.

Matt Ryan looks like that rare polite Manhattan commuter that goes out his way to get out of your way because he wants nothing more than to avoid confrontation at all costs.

It’s unbelievable this man is not an accountant who hosts dinner parties where everyone is required to wear their favorite pair of khaki pants.

The Chargers seemed they were collectively on a whole ‘nother level, starting with Keenan Allen’s vintage Shaq jersey. No clue on earth what this is supposed to be but that doesn’t mean I can’t love it.

Keenan’s teammate Melvin Ingram was kind enough to drop in just to let everyone he basically now owns L.A. (Even though he’s barely on the list.) The unmistakeable confidence is really what matters most though.

Because while the chain and shirt are off the charts, it’s his facial expression that truly seals the deal. In his mind, Melvin has just hit the equivalent of a walkoff home run in Game 7 of the World Series with this ‘fit. 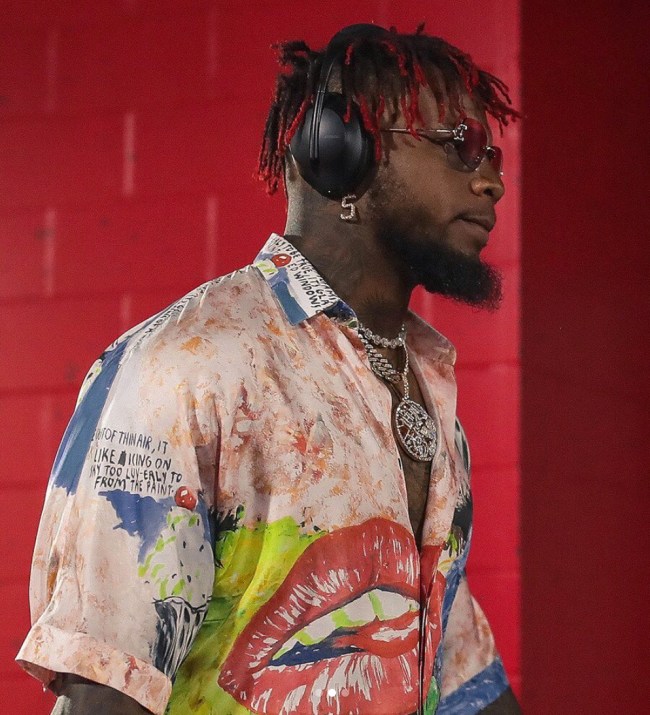 In all honesty, I don’t even know where to begin or end when it comes to this shirt. All I know is I 1000% need it on my doorstep — by tomorrow afternoon at the latest — along with a carton of top-shelf cigars.

Please and thank you.

Watch as TE @JasonWitten talks about how special it was for him to play well and help his team win in his return from retirement. #NYGvsDAL

The absence of Jason Witten’s “hair hat” this season is already proving to be a crushing blow. He’s gotta bring back the rug for at least one week. We need that thing like we need oxygen.

This is the look of a focused man who still can’t believe his team lost the AFC Championship because Dee Ford was offsides. An absolute assassin, smooth and sharp, ready to take care of some unfinished business. Exactly what you want to see if you’re a Chiefs fan.

'We played well across the board'
– Bill Belichick on the win

No one gives a middle finger to the fashion world quite like Bill Belichick. The best.

Sometimes the before and after look can tell the whole story without saying a word.

There’s Baker sporting a trendy jean jacket with the intentional rips and then there’s Baker appearing as someone who possibly just entered the Witness Protection Program. 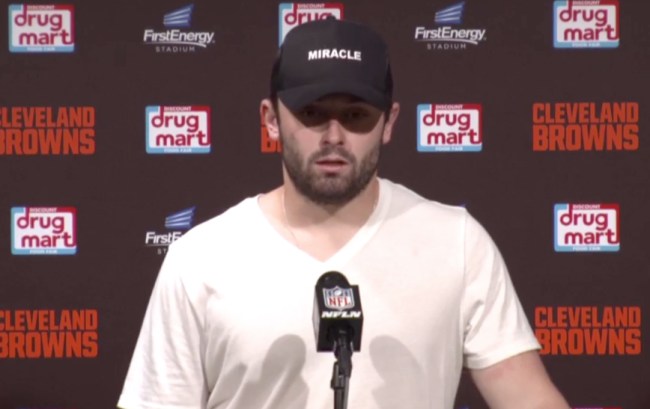 The difference between winning and losing is everything.

.@KirkCousins8 only threw 10 times in today’s win, but he’s totally fine with that.

“The only stat that matters is a win.” https://t.co/xUt3LC1NAe

Rarely use this word to describe someone, but Kirk Cousins is prominently in the mix with Matt Ryan as “biggest dork in the NFL.”

This is not the title to be shooting for, guys. Get it together.

QB Josh Allen: “No one on our team flinched when we were down at halftime. This isn’t how we want to win every week, but this is the definition of a team effort.” #BUFvsNYJ #GoBills pic.twitter.com/u4MJnunXlf

To the surprise of no one, the streak continues as Josh Allen constantly looks like he’s been accused of something.

One of the biggest differences between defensive linemen and offensive linemen is how much of a shit they give about their respective wardrobes. This photo serves as a prime example.

Is this Green Bay’s starting tight end and fullback or are we looking at the new tag team champions of the wooooorld?! Given the all-black ensemble, the matching sunglasses and a t-shirt that says “The Enforcer” — what’s up, Arn Anderson? — plus FOX’s new deal with the WWE, I think the answer is pretty damn clear.

Throw on some giant green shoes and he’s getting dangerously close to being mistaken for the mascot of some random fast-food chain.

Check out Jay Cutler’s flow! The Chicago legend’s still got it.

This honestly may be the first time I’ve ever seen the king of charisma actually smile.

2019: “…at it’s a core, a plant based diet is best for not only your overall health, but also your skin.” pic.twitter.com/6ju6MOyWL4

OK, we’re basically looking at two entirely different people and we need a full investigation at once. You can’t look at me with a straight face and say “it’s just a great diet, man!”

Maybe if one photo was from freshman year in high school and the other one was Brady’s rookie year in the NFL, we could put any underlying controversy aside. But this is absurd.

Odell is playing with a watch worth $350k

Of course OBJ played a game while wearing a watch worth $350k — because #PersonalBranding, man — and course the Browns got their asses kicked all over the place.

Things already feel so wildly off the rails for so many teams after just one week, it feels like a new record. Maybe it’s the flood of media coverage or maybe it really is an especially ridiculous shitshow already. Either way, I’m here for it.