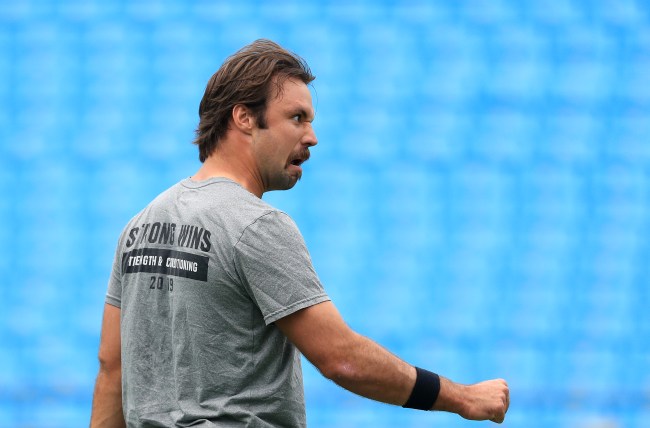 Entering Week 5 of the NFL season, you had to be thinking positively. At first glance, at least. Because the only two teams not partaking in the spirited football festivities were the Lions and Dolphins, which was hardly disappointing news. It’s like finding out the worst, most annoying couple invited to the party is hung up in severe traffic and will be roughly nine hours late.

However, there was some bad news. Take a look at this list of players who were out:

Just a brutal amount of stars in there, especially our boy Cam, a player who shines like no other in this space and was spotted in a walking boot as recently as Saturday.

Oh, and also in a freakin’ Croc.

Maybe we don’t miss him? An endlessly confusing player, without a doubt.

But enough about who’s missing and whatnot, let’s get to the point of why we’re here. So in my weekly nod to enthusiastic CNN anchor Chris Cuomo, who flat-out refuses to stop shouting this and neither will I — whaddya say, let’s get after it!

'We did a better job executing'
– Tom Brady on the win

It’s partially the facial expression but it’s definitely the haircut too. Feel like his business card should say Biff Brooks Brother.

And how about those balloon pants? Get yourself fixed up, Sir Thomas, so I can rightfully call you that once again.

Tom Ford isn’t going to personally fly out to fix what needs to be fixed. But I will. @TomBrady I’m ready 🔪 pic.twitter.com/exl9MibTm3

Mahomes showing up in a Kansas City Monarchs jersey is just another sign of his genius. Sadly, said genius can only do so much on a football field when you’re basically getting power-bombed into a volcano on 75 percent of the plays you call.

It would be ideal if the Chiefs had an upcoming BYE Week but alas they do NOT. Battle through it, tweet through it. Do what you need to do, Patrick. And please scream at your offensive line until Wednesday at the earliest.

.@GardnerMinshew5 or veteran FBI agent who just landed in town to run point on a special detail? pic.twitter.com/bfIYZHHUGD

This caption is very close but I’m going with Gardner Minshew II, rogue FBI agent who just landed in South America with “the bag.” And no, this is most definitely not Agent Minshew’s first “exchange.”

"We’re going to go home, do whatever it is and when we come in tomorrow, we’ll turn the page and become a better team.”

Love the casual no-tie look as well as the jacket that’s team-loyal in the most elegant of ways. Very well done, Dak.

Now let’s cut down on those INTs. Not great!

A player so widely celebrated like Aaron Rodgers should not be standing at a podium in a blue long-sleeve shirt and a gray undershirt. Not in 2019.

So plain and boring it hurts. Particularly when he’s ALLEGEDLY somewhat of a dickhead. You’d think a lockerroom diva would dress more like John Wick and less like what you wore in your 3rd-grade picture.

But alas, here we are yet agaaaaain.

The #Packers are in the building.

Note: Just please ignore the other two photos that were unfortunately included in that tweet.

The Smiths step off the ✈️ in Texas 😎😎#GBvsDAL | #GoPackGo pic.twitter.com/DBIOVEqtND

Damn, Preston even knows how to fly in both comfort and style. We should all be taking notes.

It doesn’t matter how it gets done, @KirkCousins8 just wants to win.

And today the #Vikings did just that. https://t.co/fp0yHRnwjL

Of course the one week where Kirk Cousins absolutely needed to see some much-needed success on the field, and did, he steps up to the podium looking like he’s awaiting sentencing while his whole family looks on in disappointment.

It’s kinda tragic that the hilarious days of “Lost Puppy Josh Allen” and “What Planet Am I On Josh Allen” are long gone. We all knew this time would come, though.

The Bills are now 4-1 and with that comes “Cool And Confident Josh Allen,” complete with fancy socks and whatever he’s slowly murdering in that plastic bag. My guess is it’s either several plastic bags within a plastic bag or perhaps a head of lettuce.

Listen in on how we reacted following that last-second missed field goal. pic.twitter.com/IxYKnF6wgO

As opposed to prior years where Russell Wilson has appeared as though he just walked out of a salon, this dude — now a father of two — does not give a single shit what his hair looks like and I love it.

Also, major props to Russ for knowing what’s up when it comes to baseball.

Nice and casual too. He’s not wearing 17 different brands tagged within the post because his publicist told him it was a great opportunity to further his #PersonalBrand. Dude’s just chillin’.

Arriving so happy like this means you’ll likely score 4 touchdowns and completely bust up millions of fantasy football box scores.

That’s just how it works.

There is literally not one snarky thing I can say here, and that’s OK. We see you Amari, we see you.

I’m telling ya, no team has more fun and more swag than the Houston Texans.

Watson is Exhibit A, but make sure you scroll through the gallery above.

If it’s a game day for Kenny Stills, chances are he just owned your ass with another amazing outfit.

Yup, the Texans Swag Show is a season-long event.

Wide receiver Keke Coutee is another good example, although everyone on the Texans shows up in style.*

*Except for Senior Head of Security, J.J. Watt.

This is the very first photo of an athlete that reminds me of a Seinfeld episode, specifically the one where George and Jerry keep telling the very patient Lupe to tuck, not tuck, tuck, and on and on it goes.

When you know something that everyone else in the room most certainly does not, like who killed Kennedy.

The consistent smugness from The Bill is something to behold.

Though I must say, I do love the suit along with the sneakers. Great touch.

Cowboys kicker Brett Maher seen here shortly after a reported 12-hour interrogation session that may or may not have to do with two missed field goals.

Someone be a friend and throw this man a towel. And directions to an escape tunnel.

I’ll go ahead and give Seahawks tight end Will Dissly some surprising credit here: The shirt does match the beard. That’s it, that’s the credit.

Because that combover looks like it needs to be resuscitated or killed on the spot. Can’t decide.

Gotta love this because it never fails.

Before a game: It’s the first day of school and Aqib Talib is giddy and apparently can’t wait to catch the bus with his friends.

After a loss: It’s time to be 10,000% serious and break out your very best jacket, chains, belt, watch, and man-purse.

Coach Zimmer loved what he saw in all three phases during today’s win over the Giants.https://t.co/5KGF0V9cGi

Mike Zimmer coaches the Vikings on Sundays and skis the other six days. That unmistakable windburn surrounding the outline of his ski-goggle tan line has become an NFL constant during his tenure in Minnesota.

Bengals’ teammates Dre Kirkpatrick and Carlos Dunlap look like two dudes all hyped because they have front row seats to a boxing match or the premiere of WWE’s Smackdown of FOX. And frankly, they would both be better off doing either one of those things rather than suiting up for the Bengals.

Jets safety Marcus Maye just gets it and makes it look easy, something that only a select few can do.

Some Other NY Jets

None of these players were tagged in the tweet and come on, it’s the Jets. I can’t eyeball these guys. Though I must say, this trio has a special kind of vibe going.

Definitely not a 31-6 embarrassment kinda vibe, but life comes at you fast when you play for the Jets.

The Falcons could sure as hell use some of the good luck they’ve been sending the Braves way.

Colt McCoy lookin’ sharp and ready to take down the Patriots dynasty with his bare hands.

Obviously kidding. Colt looks like he’s heading to his next class, on time, while listening to the soothing sounds of nature.

The best shots of the players on game day are the truly candid ones like these.

This dude’s tailor honestly deserves some kind of award.

Is anyone even remotely surprised at all that the Colts won in Kansas City? Gamblers should really be checking out these arrival photos before any big decisions are made. Indy killed it in all facets.

In closing, if you happen to watch Power on STARZ, you will absolutely love the shit out of this tweet. Hell yes, Ghost and Tommy.

If not, who cares, enjoy the week and see you next Monday!