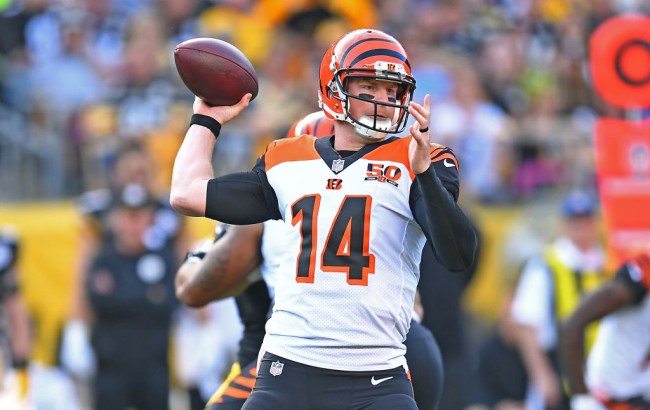 Welcome to Week 8 or otherwise known as: “the week when your fantasy football starting lineup goes to shit.” Six teams are on the bye this week and teams are really scrambling to fill those roster spots. There was an FAAB bidding war in some leagues this week for Jalen Richard and DeAndre Washington. Both are mediocre running backs and they’re splitting time for one week against a good defense. But teams would rather take a shot at that production than have to throw Rob Kelley, Isaiah Crowell, or even an under-performing pass-catching back like Theo Riddick in their starting lineup. There’s even some talk about starting guys like Deonte Thompson this week since he caught a few balls last week…5 days after he signed with the Bills! That’s how desperate we are right now. Last week had some really low scores and you better expect to get some terrible ones again this week. Hope you drafted some depth!

There are many good quarterback options this week, especially if you need streamers. Load up on Dalton since Indianapolis has allowed at least 295 passing yards and one touchdown in every game that wasn’t against the Browns. (And even the Browns’ Deshone Kizer was able to score 22.1 fantasy points against them.)

Hopefully your league has at least 1/2 PPR scoring to bring it up to the modern era, but Kamara will be an effective play this week even if it doesn’t. The Bears have a good young front seven and have held four of seven opponents under 100 yards rushing from RBS. New Orleans has been very effective running the ball recently, but Sean Payton is smart enough to change to more of a passing game plan if needed and that will get Kamara involved plenty.

Blount has been on the sit side of this column a few times this year, but that’s because he’s so matchup dependent. This week the matchup works in his favor as the Eagles are a 12.5 point home favorite and the 49ers give up the most fantasy points to running backs.

Both of the Panthers wide receivers are strong plays this week despite Carolina’s crappy offensive display last week. Tampa Bay is allowing the most points in PPR scoring (2nd most in non-PPR scoring as well) to wide receivers. It’ll be a nice and day experience for Carolina’s offense compared to what we saw against the Bears.

I’m taking a shot with Williams this week despite how worthless he’s been most of the year. The Chargers will need to score to keep up with the Patriots this weekend and Bill Bellichick knows that Rivers loves going to Keenan Allen. New England will focus their defensive efforts on Allen, leaving San Diego’s secondary receivers with less focus and allowing them the opportunity to succeed.

Rudolph has disappointed so far this season, but that’s partly due to the fact that Minnesota’s outside receivers have been playing so well and the running game had success. Rudolph should be featured this week because Stefon Diggs is still banged up and Cleveland does a reasonably good job at stopping the run. Case Keenum will have to find receivers during the game and Cleveland’s given up the second most fantasy points per games to tight ends.

This is the true test for Watson. He’s been able to light up bad defenses all year, but now he goes against one of the league’s best in one of, if not the most, raucous road environments in the league. Seattle has limited quarterbacks to under 10 points in four of six games and allow the fourth fewest fantasy points to the position. With all the streamer options this week, leave Watson on the pine.

Martin received heavy usage last week and is being featured by the Buccaneers, but that doesn’t mean he’ll have a good week ahead of him. Carolina has allowed under 80 rushing yards to opposing running backs in six of its seven games.

Like Martin, Hyde has seen a usage uptick. Like Martin, Hyde goes against one of the best run defenses in the league this week so the usage doesn’t matter. Philadelphia has only allowed three rushing touchdowns in seven games and hasn’t let any team’s running backs amass more than 81 yards in a game.

The scenario for playing Hilton this year is pretty easy. You play him at home against crappy opponents. Otherwise you just don’t play him. He’s on the road this week against the Bengals strong duo of outside cornerbacks and that means you won’t have to worry about him scoring in bunches when he’s on your bench.

In a week with six teams on bye, you’ll be reaching to find viable options. Jones should not be on your radar as a replacement because the Steelers defense has allowed the fewest fantasy points to receivers. The most yards receivers have amassed

The tight end position is so lean that it’s hard to bench guys that were originally drafted as starters. Reed, however, will likely see a drop in performance after his big game last week. Dallas has only allowed one touchdown to TEs all year, partly because their cornerbacks are so bad and teams are attacking them with wide receivers, with five out of six games resulting in less than 60 yards for the position.