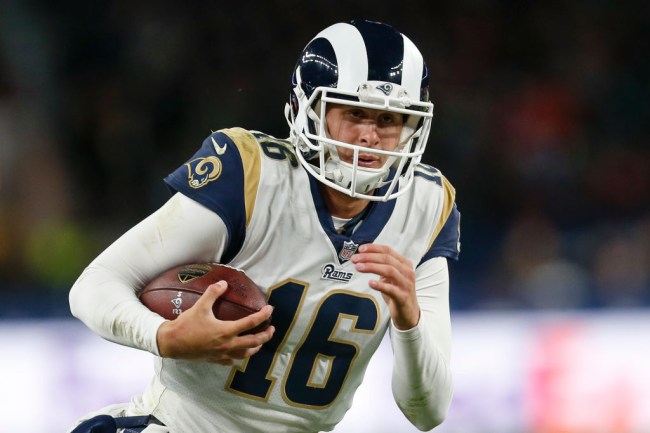 We’re entering another week with six teams on the bye and things are uglier than last week if that’s possible. Maybe it’s just the way the bye weeks are stacked on my teams, but I feel like I’m scraping the bottom of the barrel for usable plays. The good news is that bye weeks are almost over so if you can survive this stretch then you’re in good shape going forward.

The Giants once vaunted pass defense isn’t that anymore. They’re giving up the sixth most fantasy points to quarterbacks and have just suspended their best cornerback indefinitely. Olivier Vernon and B.J. Goodson look to still be injured, so you can fire Goff up in this good streamer spot.

It’s finely happened. It doesn’t look like Zeke is playing for the Cowboys so Morris is in as the starter and it’s a cake matchup. KC is 31st in DVOA for run defense and even made C.J. Anderson look good last week. Morris may not own all the carries, but he’ll own enough and definitely has some touchdown equity.

Drake is in somewhat of a timeshare with Damian Williams now that Jay Ajayi left town, but he’s in a good spot this week. Oakland is in the bottom third of the league in fantasy points allowed to running backs and run defense DVOA. We try to ignore narratives, but I could totally see Adam Gase trying to show Ajayi that the team can run the football better without him.

We know Ginn is a boom or bust guy, but this is definitely a boom spot. He’s at home on the fast track against the defense that allows the most fantasy points to wide receivers. Drew Brees likes to spread it around, but he has been targeting Ginn a decent amount this year and Ginn has rewarded him with solid production.

It is a bad week for wide receivers with the bye weeks and bad QB situations so I’m throwing this out there because I landed on this spot in multiple leagues. The Chiefs are going to score a lot of points against the Cowboys and Dallas will have to keep up. Zeke is out so Dallas is going to have to throw the ball more than normal despite what I mentioned above. Cole Beasley is banged up and may not play. Even if he does, Williams has the potential so see 6-8 targets and has the potential for touchdown. It’s worth the shot.

BREAKING NEWS: Jordan Reed is hurt. (Shocker!) Davis usually steps in well when Reed is hurt and he’ll get the chance to again this week. Seattle is mid-tier when it comes to defending tight ends, but with all the injuries to the offensive line and Jamison Crowder banged up, Davis will see plenty of targets. That’s all you can ask for out of a tight end.

The beauty of Dalton is he’s a high-end streamer for fantasy. He’s so matchup dependent that you know what you’re getting. This week he’s facing the Jaguars, who are on a historic run against quarterbacks. They’re allowing 6.9 fantasy points to quarterbacks, 2.5 points less than the next best defense. Bench Dalton and reach to the wire for plenty of good options.

We don’t fully know how the Eagles are going to split carries, but that doubt is only part of the problem. Denver’s offense is garbage, but their run defense is still incredibly stout. A running back getting all the work would be tough to consider, but if there’s a chance of splitting work then it’s definitely a stay away.

With six teams on bye, it’s hard not to play Coleman because there’s so much trash out there. But if you have any other options on your bench, consider putting them in for Coleman. He splits work and goes up against the Panthers, who have only allowed one team’s set of RBs to go for more than 100 rushing yards this year.

It’s been a weird season for Jeffery, but wide receivers on new teams don’t exactly have a productive track record. Jeffery also hasn’t seen more than 7 targets in any game this year and has only seen more than 4 in one game! That’s insane and now he’s going against Aqib Talib. That’s a recipe for disaster.

There are three things going against Garcon: he’s banged up (and might not even play), he’s got a shit quarterback in C.J. Beathard (at least for a few more weeks), and he has Patrick Peterson going up against him if he plays this week. No thanks.

New Orleans is surprisingly good in pass coverage this year, especially when it comes to defending tight ends. Brate doesn’t look like a big producer this weekend against a defense that has only given up more than 36 yards to the position once this year.