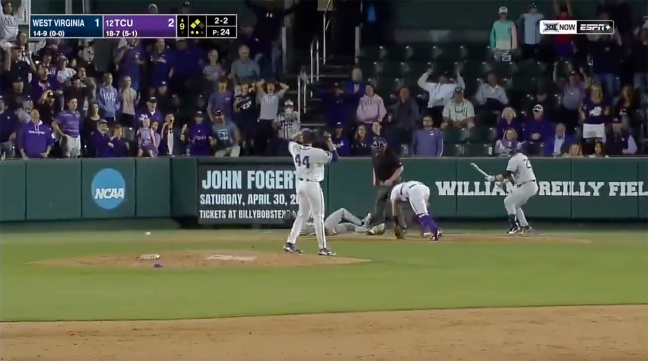 TCU baseball is poised for one of its best seasons in recent history this year. However, the 12th-ranked Horned Frogs dropped their eighth game of the season on Friday and it got rather testy.

During the ninth inning of Game 1 of a three-game series, West Virginia was down to its last strike. The Mountaineers were behind 1-2 with two outs and two in the top half of the inning. As the visiting team, they had no choice but to get gutsy with it and that’s exactly what they did.

With runners on second and third, WVU needed just one to reach to tie the game and two to reach home to take the lead.

Somehow, both of the West Virginia baserunners scored on the same play.

As the 2-2 pitch made its way to the plate, the runner on third took off for home. After it appeared as though he would be out by a mile, the TCU catcher could not hold onto the tag and the steal of home was successful.

In the process, the ball got loose and went rolling toward the backstop away from the catcher. As the catcher went to retrieve the ball and the pitcher ran to the plate to cover the throw, the second Mountaineer baserunner rounded third and headed for the plate.

He got in before the tag and scored to take a 3-2 lead. It was chaotic and it was awesome.

As the home team, TCU got one last chance to win the game and got incredibly close. The Horned Frogs loaded the bases with two outs.

After working a 3-2 count, a ball would have scored the game-tying run. Instead, the offering was called a strike and the game came to a close.

The final pitch of the game appeared as though it may have been off of the dish to the outside and the batter was livid. He immediately turned to the umpire and things got chippy for a moment before his teammate came out and brought him back to the dugout.

While the TCU batter complained and the Horned Frogs went home sad, the Mountaineers celebrated loudly on the mound. It was quite the upset and it came in quite the unique, exhilarating fashion.