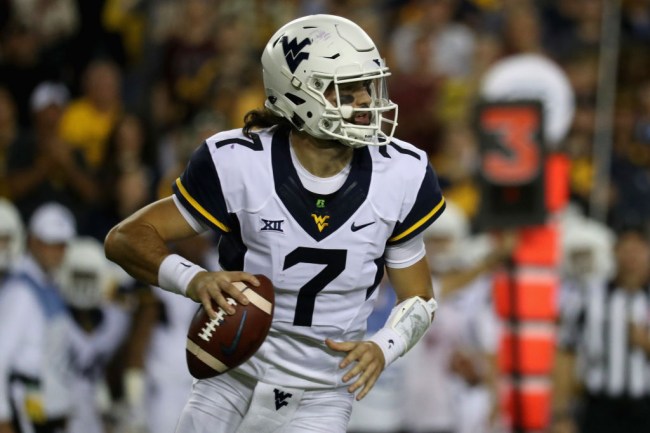 Things went from good to bad very fast for the West Virginia Mountaineers during their game against Texas on Saturday.

On a designed QB bootleg play, WVU QB Will Grier sprinted and dove near the right side of the end zone pylon. While Grier was in the air,Texas defensive back Brandon Jones was able to knock the ball loose at the exact same moment Grier attempted to cross the plane of the end zone. Grier’s right hand eventually landed awkwardly which caused his finger to get bent in a painfully unnatural angle.

Grier’s finger got pretty beat up as you can see in the picture below.

WARNING: The picture of Grier’s finger is pretty nasty.

(You can watch video of Grier’s finger HERE)

Unfortunately for Grier all that was for nothing because he play was reviewed and refs deemed the play a touchback after they ruled that the WVU QB fumbled the ball before breaking the end zone plane and Grier only reestablished possession once he was out of bounds beyond the pylon.

Grier was then taken to locker room and backup Chris Chugunov has taken over for the Mountaineers. It is unclear whether he’ll be able to return to the game.

That’s a pretty terrible outcome for the former Florida quarter back who thought he was going to end up with a touchdown but instead ended up with a terrible looking dislocated finger and a touch back for his troubles.

With an injury like that to his throwing hand, it’s very possible that he could be out for a long while.