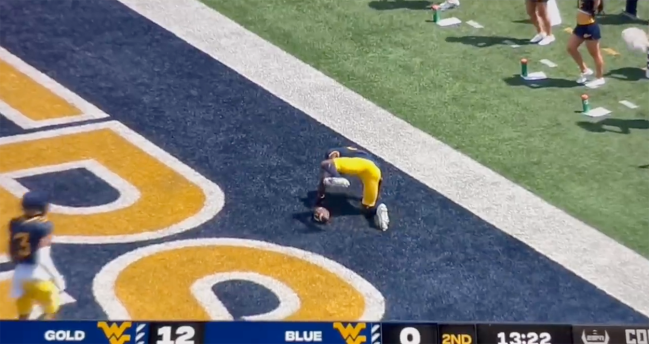 They say that imitation is the highest form of flattery. Well, Odell Beckham Jr. must be lauded because his craziest touchdown celebration has transcended across multiple generations of college football.

Back in 2017, Beckham Jr. was still a member of the Giants. After scoring a touchdown in the early season against the Eagles, he celebrated by going to the ground, getting on all fours, and hiking his leg like a dog peeing.

Later that year, as Ole Miss put a beatdown on in-state rivals Mississippi State, D.K. Metcalf scored a long touchdown to all-but put the game away. After reaching the end zone, he proceeded to fake dog pee just like Beckham.

And then, two years later, Elijah Moore did the same thing. His, however, was more chaotic.

After scoring a touchdown with just seconds left in the game against Mississippi State, Moore hiked his leg and fake peed. He received an unsportsmanlike conduct penalty for the celebration, the point-after was pushed back, Ole Miss missed and the Rebels lost.

An insane finish to the #EggBowl as Ole Miss’ Elijah Moore picks up late unsportsmanlike call for breaking out the dog peeing TD celebration.

The Rebels would go on the miss the pushed back game-tying PAT. 😳 🤦‍♂️

During the Mountaineers’ spring game, James got loose for a long touchdown.

He made a great over-the-shoulder catch and scored.

After finding paydirt, James got down on his hands and knees, kicked his leg up to the side and pretended to pee in homage to those who had come before him.

West Virginia WR [Sam James] with an interesting celebration after he scored in today's spring game.

Was flagged for unsportsmanlike conduct. pic.twitter.com/RYgZoGhmuf

James’ fake pee likely will not have the same ramifications as Moore’s, but he did receive a penalty for the celebration.

Need a better angle on this to edit it into Sam James peeing on the Pitt logo. pic.twitter.com/Oea25ZuIJb

James’ fake pee was a touching tribute to Moore, Metcalf and Beckham Jr., but it’s hard to imagine that it went over particularly well with the coaching staff.