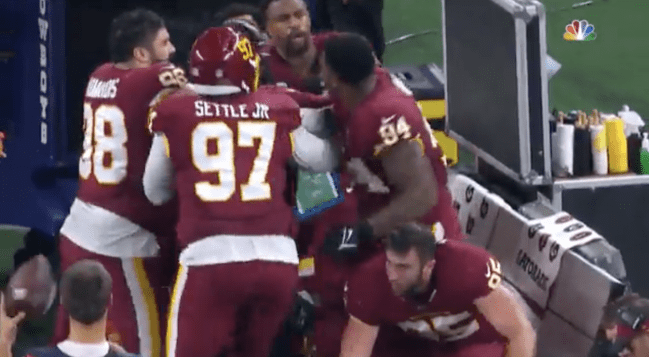 A lot was made of Sunday night’s sideline altercation between Washington Football Team teammates, but Alabama Crimson Tide fans didn’t bat an eye. It was something that they are used to, as the nation’s top team holds itself to the highest standard.

During Sunday Night Football between the WFT and the Cowboys, things got ugly quick. Dallas jumped out to a 42-7 lead at halftime and went on to win 56-14.

As a result of the poor play, WFT teammates Jonathan Allen and Daron Payne got into an altercation. Although it is unclear what the incident was about, Payne placed his finger on Allen’s head and Allen, WFT’s Walter Payton Man of the Year Award candidate, got up and swung.

After some pushing and shoving, the two were separated and tempers were given the space they needed to cool.

Allen and Payne are not only teammates on Washington’s defense, but they were teammates in Tuscaloosa on defense with the Crimson Tide. After the two got into it on Sunday, an old video surfaced from their time at Alabama.

Although neither Allen nor Payne are in the video, it provides some insight into the Nick Saban mentality and the culture he breeds. Players who play for the greatest coach of all-time expect greatness and hold each other to the highest standard. Sometimes that results in altercation.

Take the 2016 season-opener between Alabama and USC for example.

The No. 2-ranked Crimson Tide beat the No. 3-ranked Trojans 52-6 in Arlington, Texas at AT&T Stadium. It was a blood bath.

Despite the beat down, two of the Alabama defenders got after each other on the sideline. Saban came over to try and break things up for a moment, but saw that his assistant coaches had it under control and was quick to move on.

To further illuminate that sometimes the expectation of perfection breeds flare-ups, look at the 2013 National Championship. Alabama was beating Notre Dame 42-14 with seven minutes left in the fourth quarter. The game was over.

And yet, after a miscommunication at the line of scrimmage that caused a delay of game, quarterback A.J. McCarron and his center got into a brief altercation.

The culture of winning can cause tempers when things don’t go as planned. It’s not just specific to players. Sometimes, at Alabama — the best college football team in the country for which its culture is something that the rest of the nation tries to emulate — coaches and players get on each other.

Coaches? They can get it too.

Thus, when Allen and Payne fought each other on the sideline last night, Crimson Tide fans saw it as business as usual. When the expectation is to win and to execute, but the game does not go that way, frustration boils. It’s football.