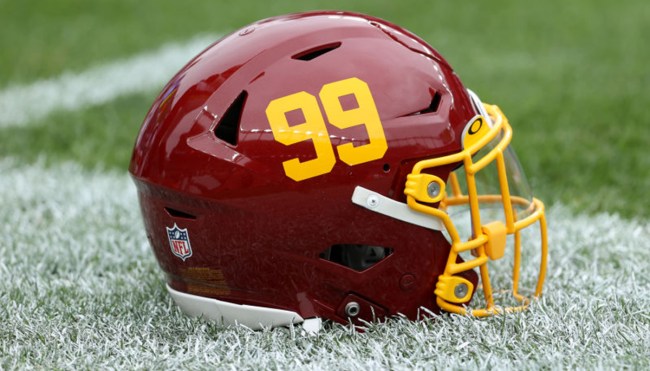 It’s been a year and a half since the franchise formerly known as the Washington Redskins succumbed to decades of pressure over its fairly problematic name and logo with a rebrand that resulted in the squad playing as the “Washington Football Team” for the past two seasons.

It seemed like there was a chance Dan Snyder would permanently adopt one of the most generic monikers in the history of sports, but in 2021, the team asked fans to submit potential ideas for a new name. In September, we learned the list of candidates had been narrowed down to eight finalists, and it appears we now have a winner based on the news that broke on Tuesday morning.

Based on a series of tweets that were sent out, the “Washington Football Team” will be no more once February 2nd rolls around, and the franchise posted a couple of videos teasing what is (and isn’t) in store on the date.

The wait is almost over

Not a date you’ll want to miss pic.twitter.com/2mcYNPN2AY

We've got an update on a popular name option, a sneak peek at the jerseys and a confirmed announcement date pic.twitter.com/IeSnetFebq

In one of the videos, a member of the franchise’s legal team revealed “Red Wolves” was eliminated from contention due to legal reasons, and while it’s hard to guess what name will be crowned the victor, I’d put my money on “Defenders” based on some hints on the new jersey that was teased and the military-centric clips in teasers (although “Commanders” may also be a better fit to avoid the inevitable jokes that would stem from the team’s defense failing to live up to that label).

As you’d expect, fans pounced on the opportunity to use the news as an excuse to make jokes and continue to air their many grievances against Washington’s ownership.

It’s hard to get excited when you don’t have a single person in charge that knows how the fans feel or the legacy of the franchise. And this is evident by what you have/haven’t done just this past season