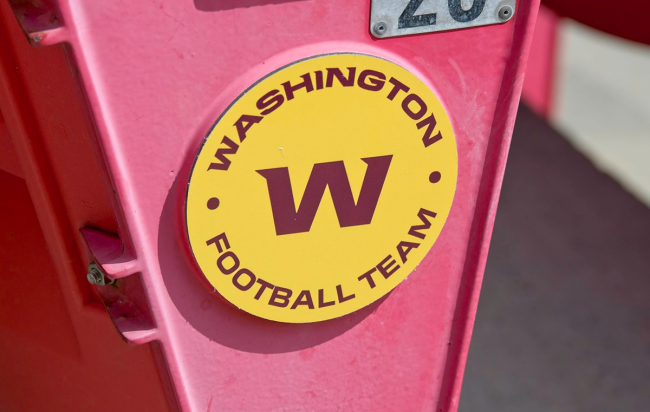 After spending decades defiantly refusing to change the name of the NFL franchise he purchased at the turn of the millennium, Washington owner Dan Snyder finally decided it was time to put his team’s controversial handle and logo behind it and enter a new era, a move that surely stemmed from the kindness of his heart and totally, definitely had nothing to do with the tens of millions of dollars he stood to lose due to the corporate sponsors who threatened to cut ties.

The world waited with bated breath for the unveiling of the new moniker, and in July, it got its answer when the organization really let its creativity shine by announcing it had decided it would be calling itself the “Washington Football Team” during the upcoming season.

When I first saw the news, I had a hard time believing it wasn’t a joke even after the team wasted no time pushing the most generic merchandise I’ve ever laid eyes on and unveiling its equally uninspired rebooted jerseys. I still wasn’t entirely convinced Snyder was just using some of the billions of dollars he has to orchestrate an incredibly elaborate bit, but that theory was put to rest when they officially took to the field as the Football Team last year.

While it may have been intended as a placeholder, Snyder has said he’s not averse to making the change permanent or altering it a tad by drawing inspiration from soccer clubs. Regardless, Washington doesn’t appear to be in much of a rush to revamp again and it seems the name will remain the same next season, but based on a recent development, that could change by the time 2022 rolls around.

According to Yahoo Sports, the Football Team has announced the next step on its road to rebranding by launching a new website outlining a five-step plan—transformation, discovery, insight, creation, and execution—where fans will get the chance to share their thoughts and contribute to the process by sending in ideas for names and potential logos and uniform designs.

If you’re familiar with how the internet works, then you’re likely aware that turning to people for guidance to help come up with names has a tendency to backfire. However, it appears the team will be screening suggestions and wisely avoiding going the popular vote route to avoid being dubbed the “Washington McWashingtons” or, if 4chan has a say, the “Washington Andrew Jackson Did Nothing Wrongs.”

If you ask me, they should just hit up the guy who came up with the sick concept art for the Columbia Red Tails, but I guess this approach provides some of the good PR they could really use after what’s transpired over the past year.